Why Stablecoins Are Suddenly in the News 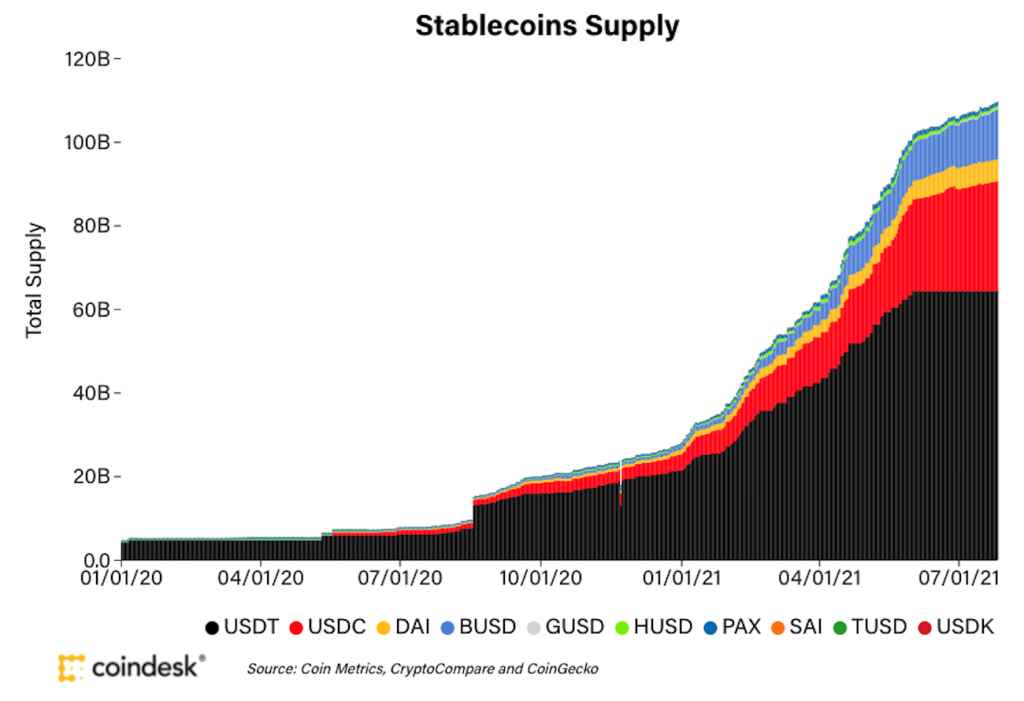 Stablecoins have existed for roughly seven years but talk about them has never been as heated as in recent weeks, not only within the crypto community but among regulators and traditional market investors.

What is a stablecoin?

Stablecoins are a type of cryptocurrency whose value is usually pegged to a range of assets, whether it’s a government-issued currency like the U.S. dollar, a precious metal like gold or even another cryptocurrency.

Issuers have been trying different methods for realizing and maintaining stablecoins’ price peg to the underlying assets. Some stablecoins pegged 1-to-1 to the U.S. dollar – such as USDT, USDC, BUSD and GUSD – are backed by reserves whose dollar value is supposed to match the tokens’ circulating supply. Others are backed by physical commodities, such as tether gold, representing one troy fine ounce of gold on a London Good Delivery bar.

There are also decentralized stablecoins such as DAI and FEI, which are powered by algorithms.

How are stablecoins used?

Prior to the rise of stablecoins, most people traded cryptocurrency against government (“fiat”) currencies and other cryptocurrencies. “Starting in 2017, spot trading against stablecoins started to dominate a larger share of the trading activity,” noted Pankaj Balani, CEO of crypto derivatives exchange Delta Exchange.

Stablecoins are also used in crypto lending. You can earn an annual interest rate of 4% from depositing USDC in a savings account at Coinbase, one of the companies behind the stablecoin. The interest rate for depositing USDT could range from 1.66% to 13.5%.

There has been much going on about stablecoins recently, and some of it can be overwhelming. Here are the three big things happening right now:

1. Tether is under a cloud

As the most traded cryptocurrency in the market, USDT has become a backbone for the entire cryptocurrency ecosystem. Over half of all bitcoin trades are made against it.

However, Tether, the company behind the digital token, has been plagued by regulatory issues.

Monday, Bloomberg reported the U.S. Justice Department is conducting an investigation into whether Tether, in its early days, hid from banks that transactions were linked to crypto.

Tether published a response on its website, saying the Bloomberg article was based on “years-old allegations, patently designed to generate clicks.” However, the company didn’t explicitly deny the allegations.

Some investors are also uneasy about Tether’s reserves, skeptical of the company’s ability to redeem its tokens in the worst circumstances. In May, the company revealed the breakdown of its reserves as part of its settlement with the New York Attorney General’s office. As disclosed by Tether, roughly half of the reserves are invested in “commercial paper” – typically short-term corporate debt – while 13% are in secured loans and 10% are in corporate bonds and precious metals.

Stablecoins had a total market capitalization of $116 billion as of July 26, an almost fourfold increase since the start of this year, according to CoinMarketCap. As growth increased so has the attention from U.S. and other regulators.

“Regulators look at stablecoins because they’re more adjacent to the existing banking system than other types of cryptocurrencies,” Alex Svanevik, CEO of crypto analytics company Nansen, wrote to CoinDesk via email. “There’s a real chance stablecoins could be disruptive for traditional finance.”

A month ago, Eric Rosengren, president of the Federal Reserve Bank of Boston, identified tether and other stable-value tokens as a risk to the financial system, citing concerns of potential disruption to short-term credit markets.

Also, U.S. Treasury Secretary Janet Yellen announced she would examine stablecoin regulation and risks as part of a presidential advisory group. Shortly thereafter, officials from the Treasury Department, Federal Reserve, Securities and Exchange Commission, Commodity Futures Trading Commission, Office of the Comptroller of the Currency and the Federal Deposit Insurance Corp. met to discuss the issue “in light of the rapid growth in digital assets.”

Separately, SEC Chairman Gary Gensler suggested last week that some stablecoins should be deemed to be securities, subject to his agency’s oversight.

In China, Fan Yifei, a deputy governor of the People’s Bank of China (PBOC), said digital currencies pegged to a fiat currency had the bank “quite worried” and “may bring risks and challenges to the international monetary system,” as reported.

Circle, the issuer of USDC, the second largest stablecoin, has also been in the spotlight. Circle plans to go public through merging with Concord Acquisition Corp., a publicly traded special purpose acquisition corporation (SPAC). The deal would value the crypto financial services firm at $4.5 billion.

Following CEO Jeremy Allaire’s pledge to make the company more transparent, Circle published, for the first time, a breakdown of the assets backing its stablecoin in its most recent attestation, dated July 16. The company reported about 61% of its tokens are backed by “cash and cash equivalents,” meaning cash and money market funds. “Yankee Certificates of Deposit” – meaning CDs issued by foreign (non-U.S.) banks – comprise a further 13%. U.S. Treasuries account for 12%, commercial paper is 9%, and the remaining tokens are backed by municipal and corporate bonds.

Another stablecoin issuer, Paxos, also released for the first time a breakdown of reserves for its stablecoins, Paxos standard and the Binance-labeled BUSD. Some 96% of the reserves were held in cash and cash equivalents, while 4% were invested in U.S. Treasury bills as of June 30.

The systemic role stablecoins play in crypto trading and lending has caused some investors to worry about worst-case scenarios, such as what could happen should stablecoins issuers face massive redemption requests.

The risk could also spill over to the traditional markets. The credit ratings firm Fitch said in a report earlier this month that risks facing stablecoins are potentially “contagious.” As of March 31, Tether’s commercial paper (CP) holdings amounted to $20.3 billion, which suggests that its CP holdings may be larger than most prime money market funds in the U.S. and Europe, the Middle East and Africa, according to Fitch.

“A sudden mass redemption of USDT could affect the stability of short-term credit markets if it occurred during a period of wider selling pressure in the CP market, particularly if associated with wider redemptions of other stablecoins that hold reserves in similar assets,” the rating firm said.

Stablecoins may also affect money supply, according to David Grider, head of digital assets Research at Fundstrat Global Advisors. “Stablecoins let you do something very interesting, which is to let you earn interest on both sides of the same dollar,” he told CoinDesk.

The actual dollars being reserved could be lent out in the real economy, while the digital receipts may be lent out again in the crypto economy and earn interest as well. As Grider wrote in an analyst note, that’s “effectively taking the same dollar and lending it twice.”