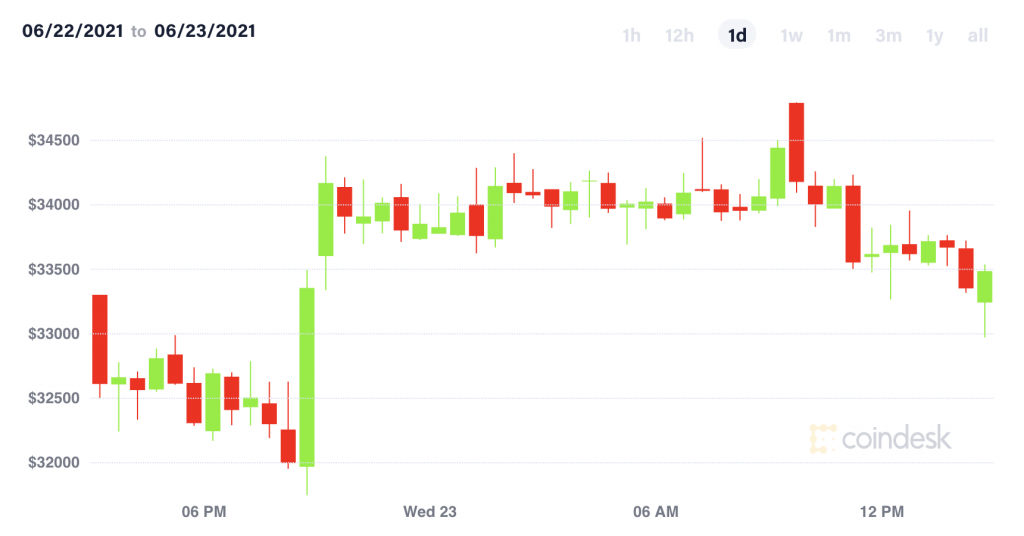 Cryptocurrencies were slightly higher on Wednesday as traders grappled with the likelihood of more regulation. Bitcoin is up about 1.9% over the past 24 hours, giving up about half of Tuesday’s relief rally, suggesting that buyers are starting to take profits.

“It’s too early to tell if this is ‘the’ bottom or just a temporary floor before more downside. The lack of any upside catalyst (beside some contrarian oversold metrics) remains the biggest hurdle for cryptos to bounce back,” Elie Le Rest, partner and co-founder of crypto hedge fund ExoAlpha, wrote in an email to CoinDesk.

Delta Exchange CEO Pankaj Balani doesn’t expect bitcoin to break $30,000 support. “Naked shorts have started to enter the market and the risk of sharp rises due to short squeezes is higher,” he wrote in an email.

The risk of further regulatory pressure still looms, however.

“Private unbacked cryptocurrencies like bitcoin may be hogging the spotlight, but the role of regulators and policymakers as key gatekeepers likely limits their potential to catalyze truly transformational change,” JPMorgan wrote in a research note published on Monday.

From a macro perspective, bitcoin’s sell-off has coincided with a broader move away from risky assets like stocks and cryptocurrencies over the past two months, as shown by the decline in the copper/gold ratio. Support at $30,000 is critical for bitcoin, although resistance is strong at $40,000.

Aside from the slight “risk-off” tone over the past few months, the recent decline in negative-yielding debt could be an obstacle for cryptocurrencies.

The downtrend in global interest rates has encouraged a search for yield as central banks remain committed to accommodative monetary policies. Those easy money policies have benefitted risk assets such as corporate bonds, emerging market debt and more recently cryptocurrencies.

“Any evidence that easy money is ending with a more hawkish stance by central banks will likely be a drag for speculative assets,” Santiago Espinosa, a strategist at MRB Partners, wrote in an email.

Bitcoin’s dominance rate, or the top cryptocurrency’s share of the total crypto market, dropped to under 40% in May, which preceded a near 30% price crash. Since then, the dominance rate has stabilized, suggesting that bitcoin is regaining its luster.

“The surge of new altcoins diverted some capital away from BTC and spread it out across small-cap assets, many of which later died out,” Coin Metrics wrote in a newsletter published on Tuesday.

The chart below shows a proxy of BTC dominance against roughly 100 of the largest altcoins, using the free float version of market capitalization, according to Coin Metrics.

An ether put options seller lost $3 million by taking a large bet against a sharp drop in the cryptocurrency and ended up booking a massive loss on Tuesday.

The trader likely sold the $2,560 puts during the bull run, expecting a continued rally to last at least until the end of the year and thus a steady drop in the option’s price. However, ether peaked above $4,000 on May 12 and fell to $1,700 on Tuesday.

“The market moved just enough to force the trader to take a loss by buying back 5,000 contracts of the December expiry $2,560 put option sold earlier this quarter,” Gregoire Magadini, CEO of options analytics platform Genesis Volatility, told CoinDesk in a Telegram chat.

The loss underscores that selling options, be it a put or a call, is a strategy better suited to institutions with ample capital supply and high-risk tolerance.

All but one digital assets on the CoinDesk 20 ended up in green on Wednesday.