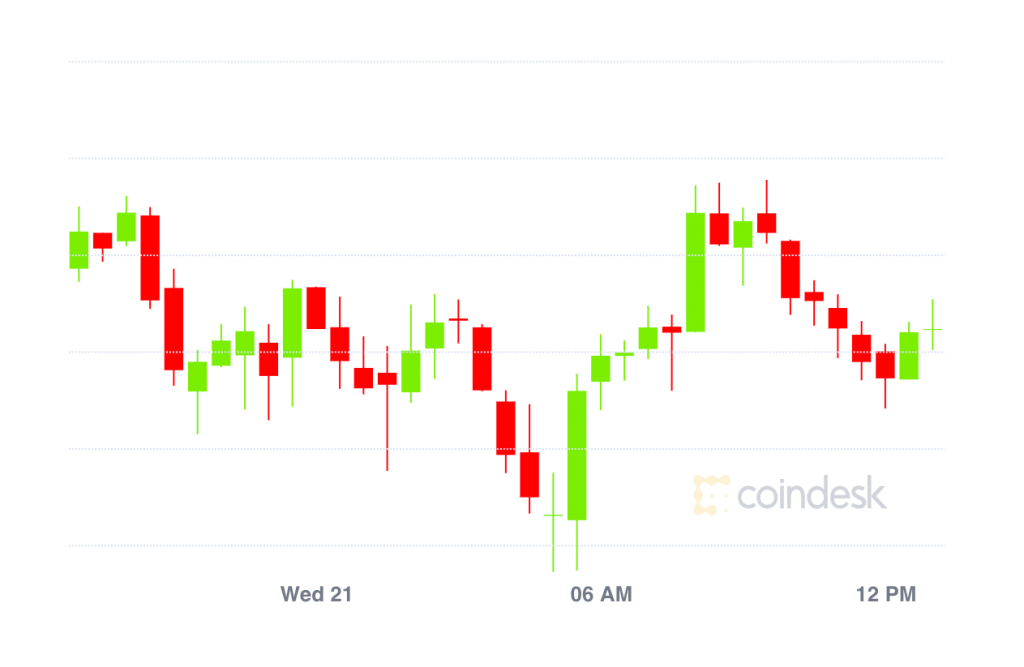 It’s boring bitcoin so far this week, with ether making gains for traders in a crypto market that overall is still signaling bullishness.

The price of bitcoin has changed little over the past 24 hours, despite the asset’s notorious volatility causing the spot market to undulate from $54,565 to $57,043 during the session, a $2,478 swing, according to CoinDesk 20 price data.

Nevertheless, BTC has mostly stayed above $55,000 for almost a month. According to CoinDesk 20 historical data, the last time bitcoin closed below that level was back on March 26.

Since the start of April, bitcoin’s dominance, a measure of the asset against the broader crypto market as calculated by charting firm TradingView, has plummeted. It’s down almost 10% since April 1, and bitcoin is currently at 51% dominance as of press time, roughly half the market. At the beginning of 2021, that figure was over 70%.

“Traders are looking for opportunities elsewhere,” noted David Russell, VP of Market Intelligence at brokerage firm TradeStation Group. ”That’s what seems to be happening now. It’s not bearish but a potential sign of confidence in the space.”

Less bullish bitcoin action after the excitement of Coinbase’s direct listing isn’t a surprise for some, with prices unable to break through all-time high of $64,829.14 reached April 14. “As expected, we saw the April 14 ‘Coinbase top’ we were positioning for that bled into a deleveraging weekend sell-off,” noted quantitative trading firm QCP Capital in an investor note on Wednesday.

A week later, traders are looking at other markets to play in. Volumes on major spot exchanges are much lower than average Wednesday, below $3 billion on the eight major exchanges tracked by the CoinDesk 20.

TradeStation’s Russell told CoinDesk that U.S. dollar inflation will continue to be a key driver for investment into cryptocurrencies, and the case for crypto remains. According to data aggregator Inflation Tool, in the past decade the greenback’s value has decreased in purchasing power,so that it takes $118 in 2021 to pay for something that would have cost $100 in 2011.

“Procter & Gamble is raising prices and the [Federal Reserve] isn’t raising interest rates. Signs of inflation are mounting throughout the economy,” added Russell. ”Inflation and scarcity value could emerge as newer drivers for the crypto space, especially with a Fed meeting next week.”

While bitcoin’s price has been mostly stagnant this week, ether is popping. A good measure for comparing the world’s oldest cryptocurrency to ether is by viewing charts on the ETH/BTC pair, available on most major cryptocurrency exchanges.

When the pair on the charts goes bullish, it means traders are selling bitcoin for ether, the case right now.

The ETH/BTC went bullish on Tuesday, with the price now well above the 10-day and 50-day moving averages on the hourly chart; it’s up over 5% so far today on Coinbase.

“It’s interesting to note at the current ETH/BTC ratio we are back to levels last seen at the beginning of February,” noted Andrew Tu, and executive at quantitative trading firm Efficient Frontier.

“In February we saw this top out at 0.046 BTC. So this is the level we should be looking at, to see whether it breaks out of that resistance,” Tu added. As of press time, ETH/BTC was trading at 0.043 BTC on Coinbase.

Nick Mancini, research analyst at crypto sentiment analytics firm Trade The Chain, told CoinDesk a breakout in bitcoin’s price performance could cause ETH and other crypto markets to see red. “If bitcoin breaks bullish out of the current trend, we will likely see ETH and [altcoins] take a small hit.”