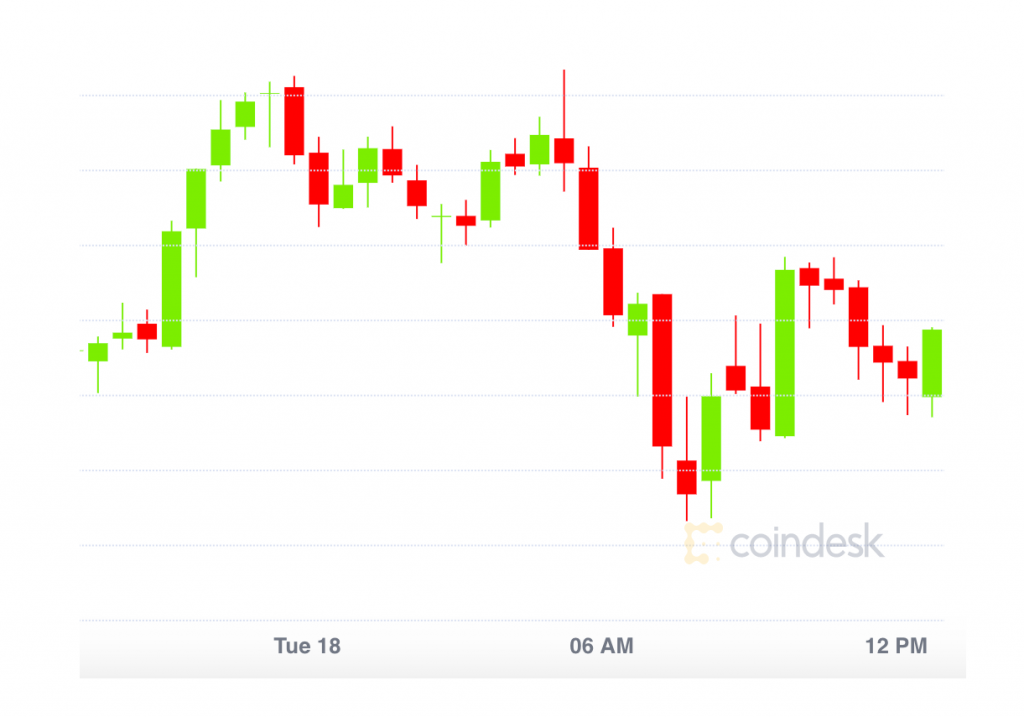 Bitcoin, the world’s largest cryptocurrency by market capitalization was down Tuesday by 2.1% as of press time and going as low as as $42,658 around 23:15 UTC (7:15 p.m. ET). BTC was below the 10-hour moving average and the 50-day, a bearish signal for market technicians.

Crypto investors seem to be back to hitting the buy button on some cryptocurrencies, however, after the mercurial Elon Musk seems to have slowed his crypto Twitter activity – at least for now.

“Last week, just a few hours before Elon Musk’s incendiary tweet about bitcoin, we warned that there was more downside potential than upside potential,” said David Lifchitz, chief investment officer for quant firm ExoAlpha. ”In terms of volatility, it has definitely increased over the last few days, but not to historical stratospheric levels. So there’s no panic yet.”

Since the start of April, crypto volatility has cropped up, according to CoinDesk Research data that tracks major blockchain-based assets. BTC volatility is up, although lowest on the spectrum, while ether volatility is pushing 110%, one of the highest as of Monday’s closing data.

Vishal Shah, founder of derivatives exchange Alpha5, said that despite volatility cropping up, he thinks bitcoin is still relatively stable, compared to assets like ETH.

“I think overall volatility feels a bit subdued,” Shah said. “We have been in a large, but measured range for about three months now in BTC.”

“Short-term momentum has weakened behind bitcoin, with resistance having been discovered near $60,000, leaving a lower high on the chart relative to April,” said Katie Stockton, a technical analyst for consulting firm Fairlead Strategies. “Long-term momentum is still positive behind bitcoin despite its weak intermediate-term momentum, favoring a bullish bias beyond the corrective phase.”

“No market can keep going up forever and especially with the recent memecoin craze,” Gord said. “I think this was a healthy dump where projects with no usefulness are being shaken out.”

Read More: Bitcoin Chart Indicator Suggests Worst of Pullback May Be Over

“Initial support for ether can be gauged by its latest breakout point near $2,038,” said Fairlead’s Stockton. “Intermediate-term momentum is positive but should moderate.”

As of the most recent closing data on Monday, ether’s 90-day correlation to bitcoin was 0.71, which is trending upward after falling since April 19, when it hit a nine-month high of 0.82. Correlation measures how similar two assets perform: A 1 would mean perfect correlation while 0 would mean two assets are totally differentiated.

It’s possible increased retail participation might be setting up for a slower market that might have the two assets working more in sync in the weeks and months ahead, at least according to one analyst.

“Bitcoin and, even more, ether have had a torrid ride over the last six months, so it wouldn’t be surprising that they go more or less sideways for a while until a new upward catalyst shows up,” Lifchitz added. “Like Musk announcing that he will focus on building better cars instead of a toaster on wheels, and stop tweeting about crypto.”

Darius Sit, chief investment officer for quantitative trading firm QCP Capital, noted PAXG’s small market capitalization and low liquidity as a reason for the break away from gold’s price, which is at $1,869 as of press time. “It’s probably thin liquidity,” Sit told CoinDesk.

According to CoinGecko, PAXG is ranked #221 out of all cryptocurrencies in terms of its market capitalization, currently around $239 million.

Read More: Crypto Custody Firm Fireblocks Has Handled More Than $500B in Assets