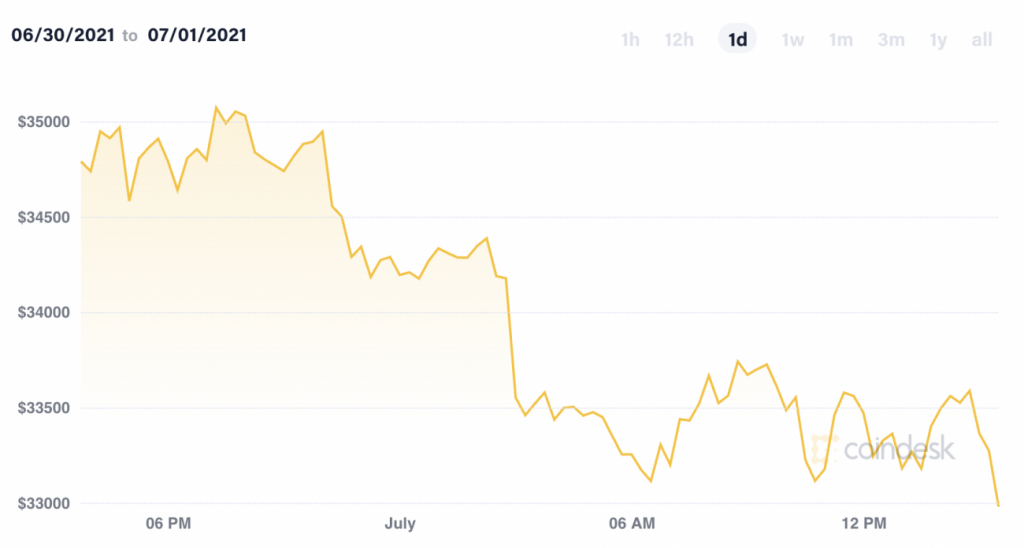 Bitcoin dipped below $34,000 on Thursday as selling pressure increased into July. However, traders expect buyers to remain active above $30,000 support as sentiment improves.

Positive news could limit downside moves after a volatile first half of the year. Concerns about regulatory crackdowns appear to have eased, especially as the bitcoin hashrate stabilized after falling for 10 straight days. The hashrate decline was mostly due to China’s shutdown of several cryptocurrency mining operations in the country.

“As miners spread to other locations, they will likely choose places with secure access to cheap energy sources,” wrote Ulrik Lykke, executive director at digital asset fund ARK36, in an email to CoinDesk. “As a result, hashrate will start recovering, and the network will become even more stable.”

According to data tracked by options analytics platform Skew, the ratio measuring the number of open positions, or open interest in put options relative to open interest in call options, fell to 0.60 on Wednesday, a level last seen in early January.

The recent decline in the put-call open interest ratio may have been fueled at least partly by a pickup in demand for calls or unwinding of long put positions, meaning an unwinding of bearish bets.

Another sign of improving sentiment is the recent positive uptick in bitcoin’s funding rate, which is the cost to fund long positions in the market for bitcoin perpetual swaps, a type of derivative in the cryptocurrency markets similar to futures contracts in traditional markets.

“Funding rates represent traders’ sentiments of which position they bet on in the perpetual swaps market,” tweeted CryptoQuant on June 29. “Positive funding rates imply that many traders are bullish and long traders pay funding to short traders.”

Ether bounces back relative to bitcoin

Ether has outperformed bitcoin over the past few days and technical charts suggest further upside is ahead. The ETH/BTC ratio held support at the 100-day moving average as charts signaled oversold conditions and improving momentum. The ratio declined from resistance in May, which preceded the broader crypto sell-off.

The chart below shows the 90-day correlation between bitcoin and ether. The two cryptocurrencies are less correlated than a year ago despite a slight advance in co-movement over the past quarter.

Analysts are looking into the rapid growth of stablecoins from a credit perspective.

Tether, the largest stablecoin issuer, which increased total assets of the dollar-linked stablecoin USDT to $62.8 billion on June 28, said it only holds 26.2% of its reserves in cash, fiduciary deposits, reverse repo notes and government securities, with 49.6% in commercial paper (CP), a type of short-term corporate debt.

“A sudden mass redemption of USDT could affect the stability of short-term credit markets if it occurred during a period of wider selling pressure in the CP market,” credit rating agency Fitch Ratings said in a report. “These figures suggest its CP holdings may be larger than those of most prime money market funds in the U.S.,” as well as in Europe, Middle East and Africa.

“Tether is essentially a big credit fund with a pool of debt assets of their own that they say cover the value,” Grider wrote. “They say most of their assets are in money market commercial paper, which if true would be relatively low-risk assets.”

Most digital assets on the CoinDesk 20 ended up lower on Thursday.