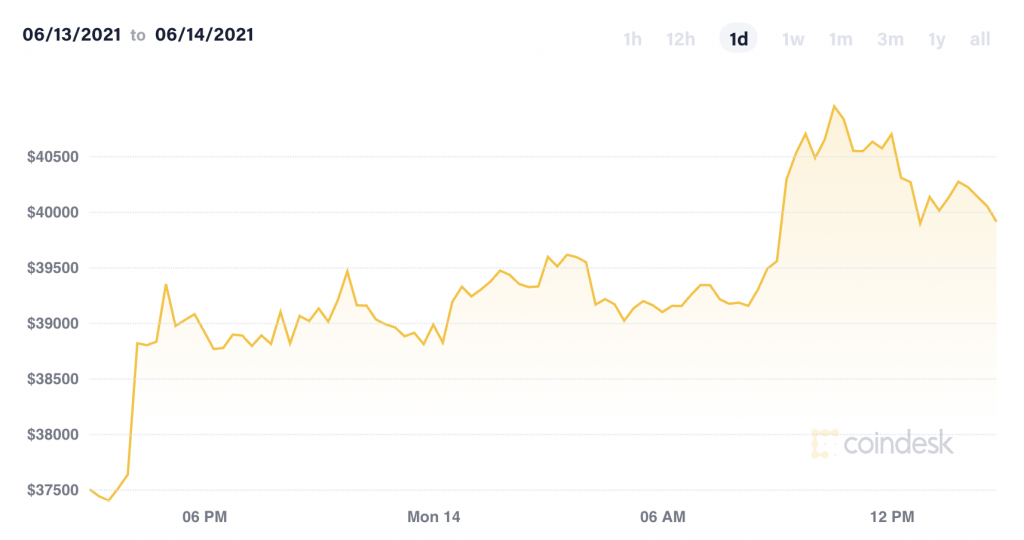 A string of positive news kept bitcoin buyers active on Monday as analysts searched for signs of a short-term bottom. The world’s largest cryptocurrency by market capitalization is up about 20% over the past e seven days and is testing the $40,000 price level for the first time in two weeks.

A number of signals “all firmly point to an undervalued bitcoin at current prices,” wrote Alexandra Clark, sales trader at the U.K.-based digital asset broker GlobalBlock, in an email to CoinDesk.

“Although many analysts are still on the fence when it comes to determining whether the digital asset is ready to continue its uptrend,” Clark wrote, “what we do know is that Musk is responsible.”

Buyers go 'all in' onbitcoin

Traders also reacted to hedge fund manager Paul Tudor Jones’ assertion he could “go all in on the inflation trades,” during an interview with CNBC on Monday. Jones said he “likes bitcoin” and wants a 5% allocation of it with the same percentage in gold, cash and commodities.

MicroStrategy is also in the news again, preparing to buy up to $488 million in bitcoin with the proceeds of a $500 million bond sale that closed on Monday. MicroStrategy’s stock (Nasdaq: MSTR) jumped about 14% on Monday and is up about 30% year to date, roughly in line with bitcoin’s price gains.

Overall, sentiment appears to be shifting to the positive following a volatile May. In fact, 87% of investors surveyed by cryptocurrency brokerage firm Voyager plan to increase their bitcoin or other crypto holdings over the next quarter.

“It’s encouraging that investors remain bullish following the recent market correction as we continue to see some interesting trends in our user sentiment surveys,” wrote Steve Ehrlich, CEO of Voyager, in an email to CoinDesk.

However, uncertainty regarding bitcoin as an asset class still lingers, which could weigh on sentiment.

Goldman Sachs’ consumer and wealth management division published a report on Monday stating crypto is “not a viable investment.” The bank doesn’t recommend it for client portfolios.

Investors have shown lingering fears of further drop in bitcoin prices and continued demand for downside hedges, as seen in the cryptocurrency’s “options smile.”

Options smile, a U-shaped graph resembling a smiley emoticon, is created by plotting implied volatilities against options at various strike prices expiring on the same date.

Bitcoin is trading about 36% below its 11-year exponential trend, according to a report published on Monday by Pantera Capital.

The recent peak that preceded the May sell-off was just a touch over trend value. Bitcoin has only spent about 20% of its history far under trend valuation, according to Pantera.

The deviation from trend could have further room to decline compared to prior lows seen in 2012 and 2020, although bitcoin does not appear overvalued relative to historical extremes.

Cycle check: Where to from here?

A research report published by Enigma Securities last week suggested bitcoin’s price could head sideways for a while but may face further downside when compared with previous bear markets in 2013 and 2017.

“Under no circumstances do we expect a quick recovery. It is, however, conceivable that we see a quicker recovery,” the report writes.

The bear market for bitcoin in 2017 was no less severe than 2013, but was shorter, according to Enigma.

Investors could be warming up to the world’s top cryptocurrency again as technicals show bitcoin is beginning to outperform ether.

The BTC/ETH ratio is now above the 50-day moving average, which could point to improving relative strength of bitcoin versus ether, according to Katie Stockton, managing director of Fairlead Strategies.

Goldman Sachs plans to offer investors options and futures trading in ether, according to a report on Monday.

Price charts for bitcoin and ether might be turning bullish after a month of market stagnation, potentially offering respite in the coming weeks, a new analysis shows.

What else we're reading (and watching):

Digital assets on the CoinDesk 20 are mostly higher on Tuesday.