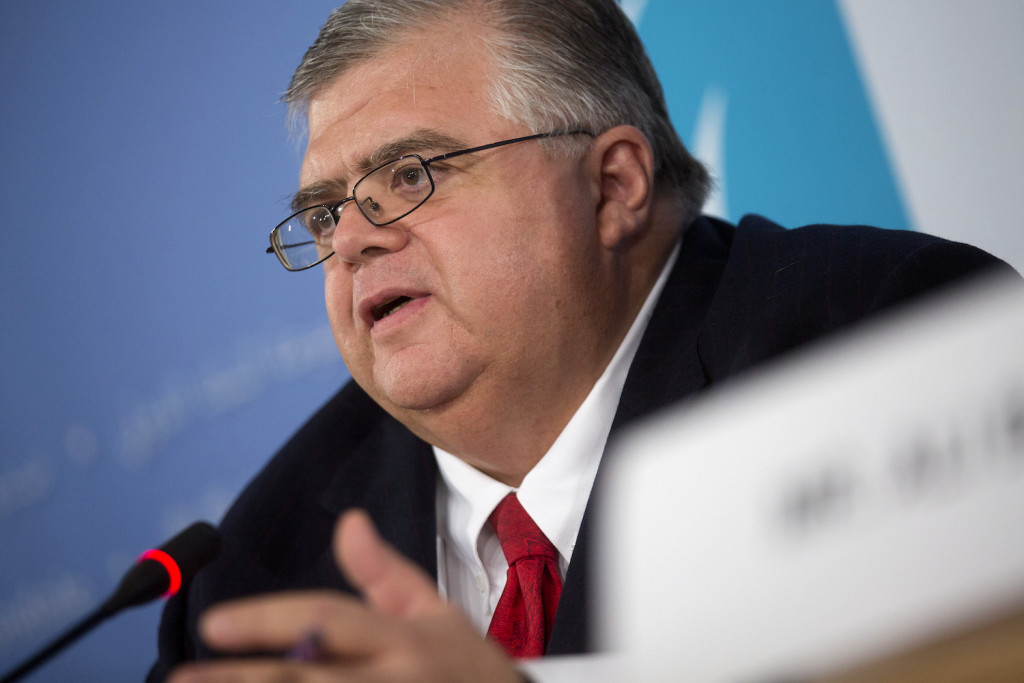 Top central banker Agustín Carstens pushed back on claims that China could capture a “first-mover advantage” over the U.S. by issuing a central bank digital currency (CBDC) before the country whose sovereign coin has lined international monetary reserves for decades.

“Much of this rhetoric is overblown,” Carstens, general manager of the Bank for International Settlements (BIS), said at the Peterson Institute for International Economics on Wednesday, without naming either country (but referencing both in his footnotes). He shot down assertions that any CBDC could win a geopolitical reserve currency catfight “owing to its digital nature alone.”

The comments highlight growing international intrigue over how digital currencies might shape the world’s two largest economies and their global monetary prominence. China’s digital yuan, perhaps the largest and most advanced CBDC project to date, is already being rolled out while the Federal Reserve continues to explore the concept of a digital dollar.

For Carstens, chief of the self-described “bank for central banks,” the goal remains fostering a more closely connected financial world even if that means through CBDCs. He brought that to bear in a Wednesday presentation that was long on international collaboration and traded heavily on the wonkish monetary details that may give digital money an edge.

Retail CBDCs could do away with fast payment systems (FPS), a catch-all for the seemingly instantaneous (though in reality loan-like and in some cases vulnerable-to-clogging) clearing and settlement systems underpinning bank-to-merchant transactions, Carstens said.

“CBDC payments are never subject to any credit risk,” he said.

The “immediate finality” of CBDCs could also simplify institutional transfers. This remains true whether the CBDC is a token-based system (like bitcoin) or an account-based one (credit card payments), he said.

Carstens contrasted FPSs, which allow customers to transact in commercial bank liabilities, with CBDCs, which are liabilities of the central bank. Most countries will see this as a distinction without a difference but Carstens allowed that it could pose a “major issue” in certain states, though he named none.

Average citizens could utilize retail CBDCs without ever having to think about all that in-the-pipes chicanery under the model Carstens put forth. He said digital wallets, the CBDC access points, could mimic prevailing digital platforms’ required regulatory screens. Similarly, “largely invisible back-end arrangements” could link those wallets to the user’s banks and credit cards for funding.

Despite being a central bank liability, retail CBDC would need buy-in from commercial banks because public and private banks “are joined at the hip” when it comes to payments, he said. “With CBDCs, central banks and commercial banks will need to find a balanced arrangement.”

Above all, Carstens emphasized his peers’ forays into programmable, digital central bank money should “do no harm” to their country’s monetary system or to the citizens within it.

CBDC may foster competition (through lower fees) that strikes a blow to the reigning payment giants, just as big tech-led “digital disruptions” now dominate in places like China. But he cautioned this model results in a “walled garden” where data remains vulnerable.

Perhaps one surprise of Carstens’ speech came as the central banking chief mulled, briefly, whether CBDCs ought to pay interest. He did not elaborate other than to say the “important decision” would likely dictate the ultimate size of CBDCs and suggested CBDCs should remain “small” relative to their resident financial system.

Carstens said he strongly believes future financial systems will all but demand “seamless convertibility” between one country’s currency and another, an effort he said central bankers have grappled with for years.

But multi-system CBDCs (mCBDC) could give those monetary wonks a “clean slate” for tackling the tangled issues that currently plague correspondent banking. Perhaps they could bridge their systems through a “shared technical interface,” he said.

The survey also indicated many central banks are open to eventually letting foreigners use their countries’ still mostly hypothetical CBDC, although most respondents had yet to decide. Respondents were relatively unfazed by the prospect of their CBDCs taking off abroad.

Controlling against that outcome is easiest via account-based CBDCs where the central bank retains a hold, and indeed Carstens said most public proposals have honed away from the token model. Token CBDCs face more promising prospects at a smaller scale.