With Evergrande on the Brink, the ‘China Hustle’ Comes Home to Roost 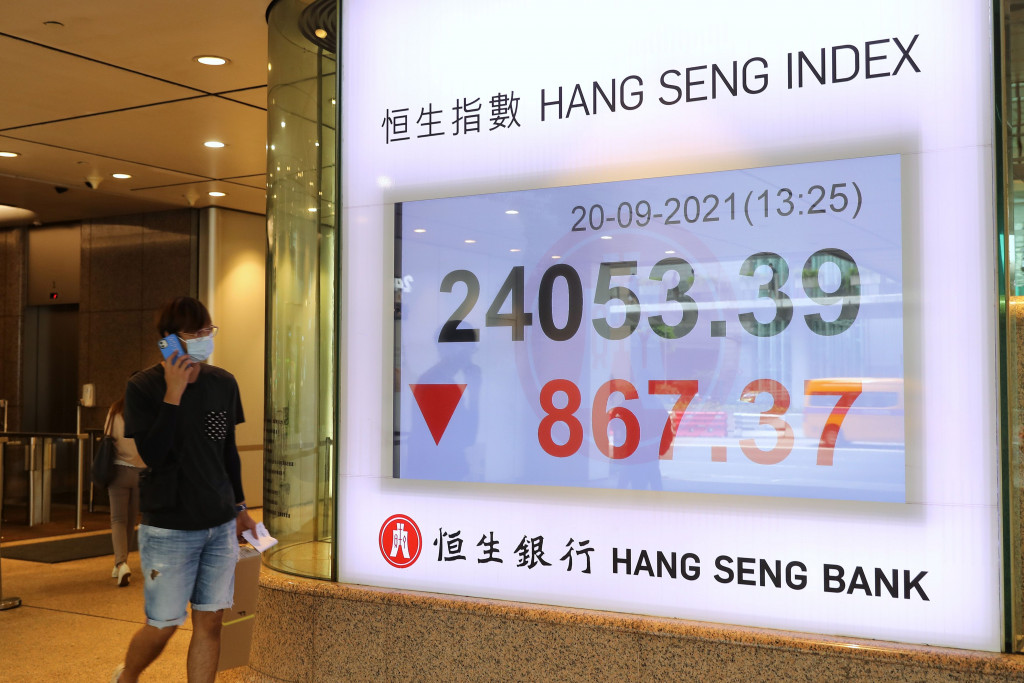 The Dow Jones Industrial Average has dropped as much as 2.4% today ? which, as a reminder to crypto traders, is in fact a whole lot in equities markets. One major narrative explaining the drop is centered on Evergrande, a hugely indebted Chinese real estate developer that appears to be on the brink of collapse.

Because its debt is held widely in China (and elsewhere), Evergrande could trigger much broader financial fallout if it defaults as the depth of its obvious insolvency becomes clearer. The final curtain, more or less, could come as soon as tomorrow, Sept. 21, when two major notes come due. One of those, according to Fortune, is currently trading at just 30% of its face value, reflecting a consensus heavily weighted towards default.

The situation has implications for the crypto ecosystem, both thanks to worries about Tether?s holdings of Chinese debt, and because crypto is clearly vulnerable to downturns in the broader market. In the 24 hours preceding this morning?s NYSE rout, bitcoin dropped 8% (which, as a reminder to equity traders, is a moderate swing in crypto terms. Store of value!).

Evergrande?s troubles are also part of a much bigger set of issues with the Chinese equity market, and particularly with the sale of Chinese equities in international markets. Very broadly, Chinese stocks are often treated the same as American equity by investors, but it is still unclear that Chinese accounting, due diligence and regulatory practices are anywhere close to being on par with those in the United States. That means Chinese investments can look sound on paper while being far riskier in reality.

The most egregious fallout from this was a wave of outright frauds between 2008 and 2016 detailed in the 2018 documentary ?The China Hustle.? Perhaps hundreds of Chinese companies misrepresented themselves to international investors, with help (knowing or otherwise) from major global investment banks and respected public figures. Most of these were eventually delisted from Western markets, wiping out billions of dollars invested by average Americans ? money that wound up in the pockets of the Westerners who engineered the deals and the Chinese CEOs willing to lie.

?The China Hustle? has a sterling pedigree. It was co-produced by Alex Gibney, who directed the 2005 documentary on Enron, ?The Smartest Guys in the Room.? The second producer was none other than Mark Cuban. Yet, I somehow remained unaware of it until the past week or so, and I think others may have been as well. We all had a lot going on in 2018, I guess ? which is a shame, because ?The China Hustle? was a warning about a broader problem that still seems unresolved, and may be about to blow up in our faces.

The basic structure of the scam ran like this. Step One: A Chinese company, usually some heavy industrial operation like a mine or a paper mill, would acquire a defunct but still-registered U.S. company, then undertake a public listing on the U.S. stock market using the shell of the old company. Then it would hire a U.S. investment bank ? usually a fairly minor one ? to hype its offering with big promises of innovation and growth. Then, basically, the company would keep faking its financial results until the lie is discovered. The culprits would keep the money.

So it?s essentially a fraudulent initial public offering (IPO), except that it?s apparently completely legal thanks to the nuances of the setup. Listing a Chinese company in the U.S. via a shell company is known as a reverse merger, which is neither uncommon nor inherently deceptive. However, the reporting requirements for a stock listed using a reverse merger are substantially lower than those for a traditional IPO.

Chinese companies took full advantage of this, sometimes exaggerating company earnings by 10 times ahead of a public listing. It?s unclear how involved the American investment bankers who ran the stock listings were in the deception, but at the very least they didn?t look too hard ? and they had no legal obligation to do so. (The risk of reverse-merger listings was also recently highlighted by the specialty purpose acquisition company (SPAC) wave, which used some similar legal loopholes to reduce transparency and have generally underperformed.)

?The China Hustle? focuses on the exposure of these scams by short-sale researchers, particularly Carson Block of Muddy Waters and Dan David, who has since founded Wolfpack Research. The heads of big companies and Wall Street sell-side banks love to castigate short-sellers as some breed of demon, but David and Block come across in the film as righteous crusaders, deeply offended by the legal grift they?ve uncovered.

David, Block and other researchers in the film are old-fashioned gumshoes, who not only ripped into balance sheets looking for clues but also traveled or sent agents to inspect the companies in question. What they uncovered is staggering. In one particularly memorable episode, an investigator visited a paper mill that was supposedly doing tens of millions in business and rapidly expanding. What they found was a nearly abandoned paper factory using antiquated manual production methods, half-flooded and at the end of a gravel road that couldn?t support the heavy trucks needed to transport the paper that wasn?t being produced.

Perhaps the most damning thing discovered in these investigations, though, was the active collaboration of the ruling Chinese Communist Party (CCP) in the fraud. One short-sale investigator, a Chinese national, spent a staggering two years in Chinese prison in conditions bordering on torture, simply for his role in trying to uncover the truth.

One by one, despite such headwinds, the shorts investigated the reverse-merger firms and found a huge proportion of the hundreds of listings to be Potemkin companies. They placed their short bets, then released reports that exposed the frauds ? and made money as the stocks cratered. What?s not to love?

Well, there is the matter of the billions in losses suffered by retirees and grandmas taken in by these frauds, who have yet to receive justice. Some of their heartbreaking stores are featured in ?The China Hustle,? a reminder that ?white collar crime? is just as brutal, violent and traumatizing as a gun-thug stickup. Dan David, for all that he?s a hero for his role exposing the frauds, also clearly struggles with being on the opposite side of the trade from these victims.

But the truly shocking takeaway from the film is that nobody else is doing this kind of due diligence. That includes the investment banks, lawyers and respectable talking heads who signed off on these offerings and shilled them to a trusting public, collecting fat fees along the way. It also includes the U.S. Securities and Exchange Commission (SEC), which only verifies data provided by companies, and doesn?t investigate whether those numbers are accurate until after a fraud is uncovered by other means.

Enemy Number One in the ?China Hustle,? though, is General Wesley Clark. That name probably has a familiar ring if you?re over 35 or so: Clark was a prominent candidate for the Democratic Party?s presidential nomination in 2004. After that, he went big into investment banking, becoming chairman of the board of the investment banking firm Rodman & Renshaw by 2007.

Under Clark?s chairmanship, Rodman & Renshaw became a primary conduit for Chinese stock frauds. Clark, who made himself available for on-camera interviews for the documentary, takes a standard line for folks in his position, essentially claiming that he wasn?t responsible for what went on while he was nominally in charge. Pressed on these questions, Clark eventually walks out of the interview (President Harry ?The Buck Stops Here? Truman must have been rolling over in his grave).

There?s shocking stuff happening on the Chinese side of the equation, too ? the imprisonment of that short investigator is just the tip of a much deeper iceberg. ?The China Hustle? includes a conversation with an anonymous Chinese journalist who claims that Chinese regulators have no power to punish companies for misrepresenting themselves abroad. As we?ve discussed before in these pages, ?the law? in China isn?t so much a fixed set of rules as a constant attempt to conform to the ruling CCP?s agenda, so such a policy would effectively mean global financial fraud is the official policy of the Party.

This remains the story behind the story of Evergrande, and why it matters for crypto investors. There?s little public discussion of the possibility that Evergrande itself is fraudulent, and the reverse-merger scam seems to have been scaled back. But even somewhat less egregious misrepresentations can and often will bring a company down, as was the case with Luckin Coffee.

This is particularly key to remember when discussing Tether?s holding of short-term debt. Tether recently denied that it holds Evergrande paper, but it has not denied that it holds Chinese paper more broadly. Even if Evergrande were the only patient in the intensive care unit, its debt could still trigger a default-driven unwind resembling the 2008 financial crisis, potentially destabilizing even completely above-board Chinese companies. Those debts are looking more and more like lottery tickets. So until Tether decides to actually implement some transparency, smart money might want to find a slightly more convincing safe haven.