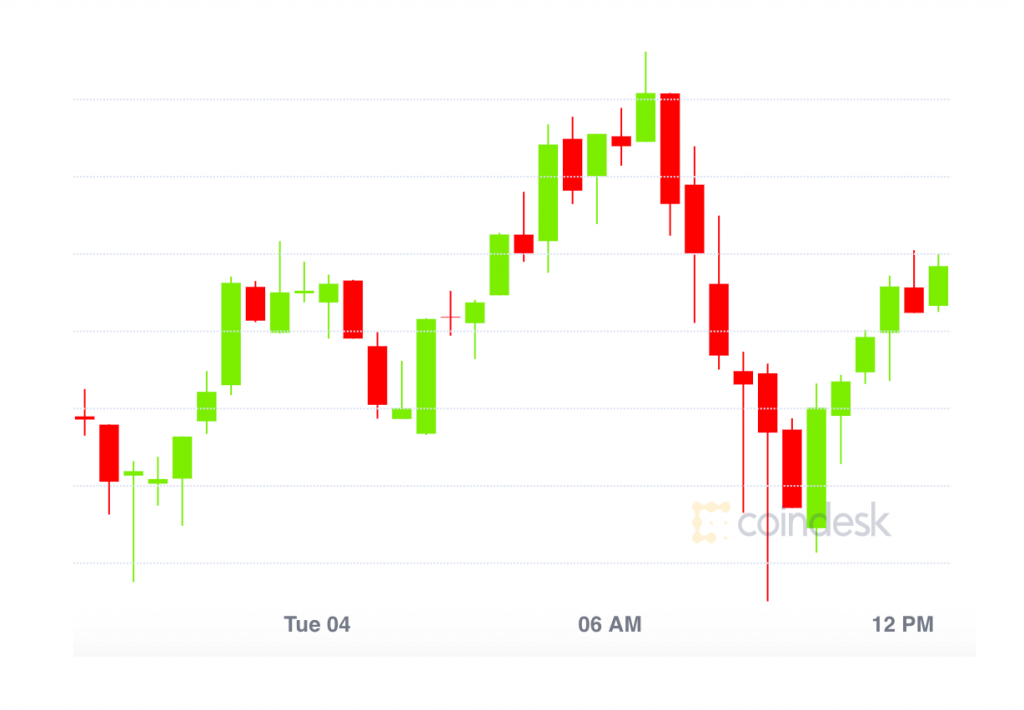 Bitcoin and ether got swept up in a crypto market sell-off Tuesday, along with U.S. stocks, before recovering later in the day. Earlier, ether and dogecoin touched new all-time high prices.

U.S. Treasury Secretary Janet Yellen was a catalyst for the midday sell-off after she warned that interest rates may need to rise. Some traders apparently sold on concerns the cheap money era might not last forever.

The second-largest cryptocurrency by market capitalization had hit a record high earlier on Tuesday, surging to $3,530 around 14:30 UTC (9:30 a.m. ET). That is over $200 more than the previous record, set Monday, of $3,300. ETH is above the 10-hour and the 50-hour moving averages on the hourly chart, a bullish signal for market technicians.

There seems to be some fascination among ether traders with the $3,000 level, noted Alessandro Andreotti, a trader in the over-the-counter crypto market.

“ETH has taken the spotlight for shattering the $3,000 barrier,” he said.

In addition to record high prices, ether’s volumes are also hitting records. In fact, according to data from CoinDesk Research, ether’s exchange volume was higher than that of bitcoin to start the week. On Monday, spot exchange volume for ether tallied $61 billion, with the spot BTC market changing hands at $52 billion.

“There’s a disconnect between BTC and ETH,” Rosenblum told CoinDesk.

This disconnect could lead to ether heading up further, according to Nick Spanos, co-founder of decentralized finance startup Zap Protocol.

“From the pace ETH has gathered in recent days, its continued growth path is certain, and levels above $5,000″ represent the new target, Spanos said.

Spanos also noted that ether’s dominance, or its share of the total market capitalization of the cryptocurrency ecosystem, is now approaching 18%. That’s the highest it has been since 2018 at the end of the previous big cryptocurrency bull run.

“The current all-time high over $3,500 has reignited the ambitious sentiment that ethereum may eventually flip bitcoin by market capitalization in the near future,” noted Konstantin Anissimov, executive director of crypto exchange CEX.IO.

Is Elon and 'Saturday Night Live' pushing DOGE up?

Dogecoin hit an all-time high Tuesday, breaking over $0.61 around 15:00 UTC (10:15 a.m. ET). The cryptocurrency, which is known for its memeable Shiba Inu dog character, now has a market capitalization of over $72 billion, according to data aggregator CoinGecko.

Over-the-counter trader Alessandro Andreotti said the prominence of Tesla and SpaceX entrepreneur Elon Musk, who has advocated for dogecoin in the past, may have investors salivating for a fundamental event occurring later this week. “I think investors are bullish for Elon Musk’s upcoming appearance on ‘Saturday Night Live.’ Absolutely.”

Bitcoin falls below $53,700 before recovering

While it does feel as if bitcoin’s day-to-day price changes have been stable, its 60-day volatility is moving up, rising from a recent low of 45% April 15. It is currently at over 64% as of Monday’s closing data. By comparison, the S&P 500’s 30-day volatility stands at a little over 10%, according to CoinDesk Research.

Bitcoin’s fall Tuesday may have been exacerbated by the traditional markets.

While Asia and Europe were mixed for the day, U.S. stocks have slipped on the possibility of higher interest rates, which Treasury Secretary Yellen mentioned on Tuesday. The fall in stocks was followed by a slip in many crypto assets.

“The crypto market appears to be entering a cyclical phase away from beta and into stock-picking mode,” noted Vishal Shah, founder of cryptocurrency derivatives exchange Alpha5, referring to the move away from quant trading.