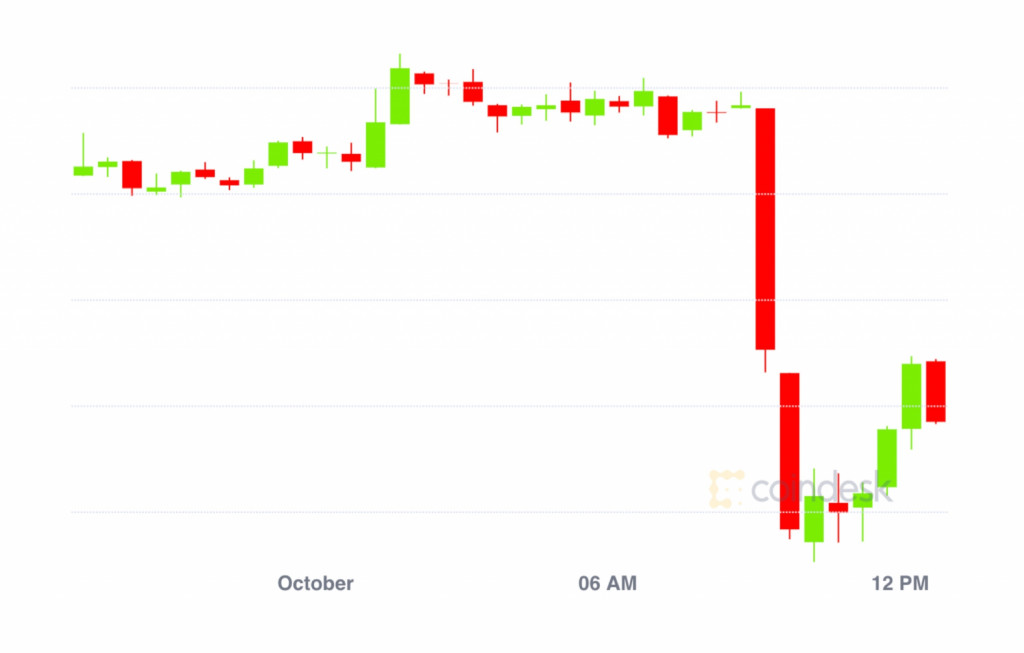 The drop coincided with the announcement crypto derivatives venue BitMEX was formally being charged by U.S. regulators for unregistered trading, among other transgressions.

“The news of BitMEX being served with a lawsuit by the [Commodity Futures Trading Commission] was met with broad-based selling pressure,” said Denis Vinokourov, head of research for crypto brokerage Bequant.

“This is big,” said Vishal Shah, an options trader and founder of derivatives exchange Alpha5, on the CFTC’s announcement. However, Shah noted the declining influence of BitMEX on the market since March, when over $700 million in liquidations helped cause the price of bitcoin to dump as low as $3,854 on spot exchanges.

“BitMEX has slowly and consistently bled open interest since March,” Shah said. “This news may accelerate that narrative, but I do not see it being a systemic risk at this point if there is an orderly resolution.”

A number of new derivatives venues, most of which do not provide access to anyone in the United States, is one of the reasons for BitMEX’s decline in the market, said Bequant’s Vinokourov. “BitMEX’s overall importance to the broader ecosystem is not as critical as was the case a few years ago,” Vinokourov added. “Not only have many other exchanges been catching up with BitMEX liquidity and order book depth, but also a widely publicized tech issue earlier this year put a big dent into venue’s reputation amongst the larger crypto trading desks.”

Nonetheless, liquidations on BitMEX helped push bitcoin’s price down Thursday, as $15 million in sell liquidations in the past 24 hours wiped out long-oriented traders on the derivatives platform, similar to a margin call in traditional markets.

Outside of BitMEX, macro economic events could lead to selling pressure as October opens, according to Andrew Tu, an executive at crypto quant trading firm Efficient Frontier.

“Bitcoin has been stuck in the $10,000-$11,000 range since the drop in the beginning of September,” noted Tu. “The elephant in the room at this point is pretty much the macro climate, with [U.S.] elections coming up and the inability to compromise on a fiscal stimulus between the House [of Representatives] and Senate,” he added.

Bequant’s Vinokourov was more bullish on the crypto market’s future, particularly with progress in Ethereum’s long and winding upgrade. “The underlying fundamentals are positive, especially for ETH given the very recent launch of ‘Spadina’ – the final testnet ahead of the Ethereum blockchain’s upgraded mainnet release,” added Vinokourov.

Tellurian Capital’s Jean-Marc Bonnefous, who has been investing in the crypto ecosystem since 2014, said some of the outrageous returns within DeFi are enticing users despite high transactional fees the miners are pocketing.

“Even with high gas costs on Ethereum, some of the net returns available on DeFi are still quite attractive compared to alternatives,” said Bonnefous. ”The basic problem, though, is that these returns are not sustainable in the long run, whatever the Ethereum costs and issues are.”