Bullish flows have returned to ether?s options market, with institutions purchasing higher strike or out-of-the-money call options. However, bitcoin, the top cryptocurrency by market value, is looking choppy amid sour forecasts made by an Australian central bank official.

?We saw institutional buying in call options at $5,000 and $6,500 strike call options over the past two days,? Patrick Chu, director of institutional sales and trading at crypto over-the-counter (OTC) trading firm Paradigm, told CoinDesk in a Telegram channel. ?In the past 24 hours, nearly 80% of the flow on our platform has been for calls.?

A call option gives the purchaser the right but not the obligation to buy the underlying asset at a predetermined price on or before a specific date. A call buyer is implicitly bullish on the market. Sophisticated traders often use call and put (bearish bets) options to hedges against long/short positions in the spot and futures markets.

?These trades [in calls at $5,000 and $6,500] were executed as a structure of two separate option legs, which is one of the main reasons Paradigm exists, to facilitate institutional flow,? Chu said, adding the client wanted to buy two options.?

The $5,000 strike call expiring on Dec. 31 saw a trading volume of more than 12,000 in the past 24 hours, while the $6,500 strike call has registered a volume of over 10,000 contracts. These trades were done over Paradigm and booked on Deribit, the world?s largest crypto options exchange, where one contract represents 1 ETH. 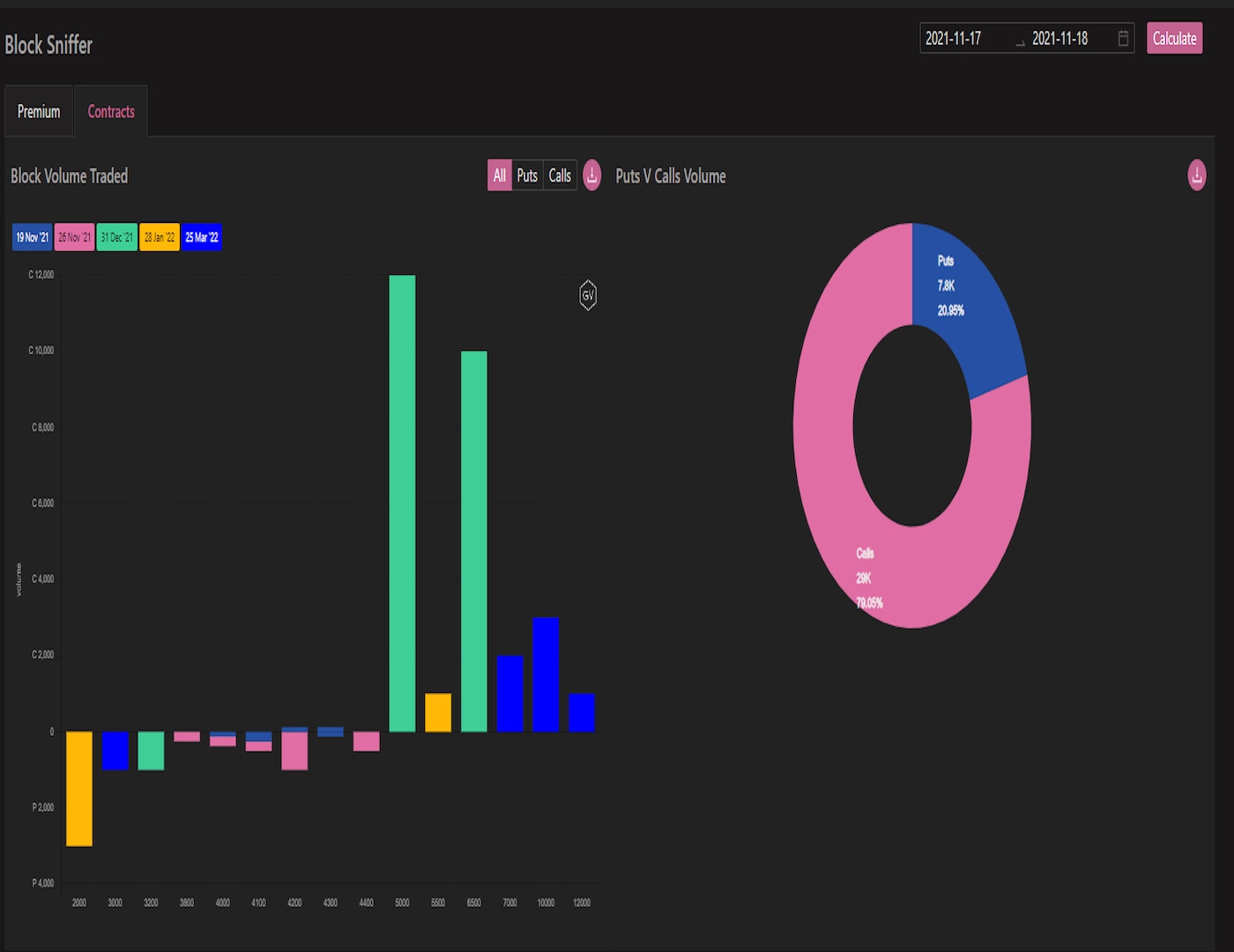 Ether has fallen by more than 8% this week to near $4,200. Bitcoin has also lost 9%, and its daily chart is now signaling a bearish technical pattern called double top.

?Bitcoin has been looking tired in recent sessions after failing to extend the record run. There is now a risk for a double top on the daily chart, which, if triggered, would expose the possibility for a more profound drop towards a measured move downside extension target in the $48,000 area,? Joel Kruger, currency strategist at LMAX Digital, said. The Reserve Bank of Australia?s (RBA) Head of Payments Policy Tony Richards warned on Thursday that the faddish interest in cryptocurrencies could quickly end, according to a Sydney Morning Herald report.

?I think there are plausible scenarios where a range of factors could come together to significantly challenge the current fervor for cryptocurrencies so that the current speculative demand could begin to reverse and much of the price increases of recent years could be unwound,? Richards said a speech to the Australian Corporate Treasury Association.

?Households might be less influenced by fads and a fear of missing out [FOMO] and might start to pay more attention to the warnings of securities regulators and consumer protection agencies in many countries about the risks of investing in something with no issuer, no backing and highly uncertain value,? Richards added.

Pankaj Balani, CEO of Delta Exchange, said expectations for a faster unwinding of stimulus by major central banks and the U.S. Securities and Exchange Commission?s rejection of a spot-based bitcoin exchange-traded fund (ETF) could weigh over crypto prices in the short term.

In the wake of high inflation, traditional market traders are pricing a higher probability of an early interest rate hike by the U.S. Federal Reserve. Money markets see the first rate hike happening in June, followed by another in November. The Chicago Mercantile Exchange data suggest a 50% probability of a 25 basis points rate hike by July 2022.

Balani added that ?bitcoin?s appears exhausted, having failed to force a convincing breakout beyond the record high zone near $65,000 for almost four weeks.? The cryptocurrency topped the April high of $64,889 on Oct. 20. However, since then, buyers have struggled to establish a foothold above the key level.

?Markets rarely spend so much time consolidating around record highs,? Balani quipped, adding that the cryptocurrency could drop to $1 trillion market valuation.?