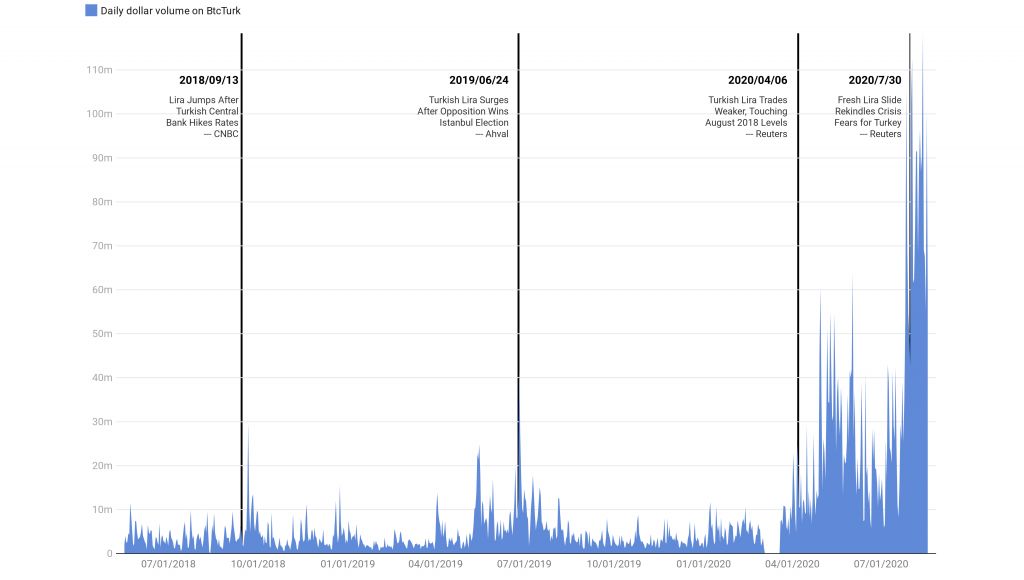 BTCTurk CEO Ozgur Güneri, head of the largest crypto exchange in Istanbul, with the most Turkish banking access of any exchange in the region, said volumes roughly quadrupled over the past year, attracting roughly 100,000 active monthly users by July 2020 out of nearly 1 million accounts.

“August might be the highest volume ever and the highest level of registrations in any month this year,” he said. “This also correlates to the volatility in prices.”

Whatever the cause, the relationship between economic crisis and crypto exchange activity in Turkey appears to have changed.

According to data analyzed by CoinDesk Research, BTCTurk volumes in September 2018 and June 2019, actually came at times when the Turkish lira was getting stronger, rather than at times of peak inflation. However, this pattern flipped with the COVID-19 crisis that hit Turkey especially hard in April. Since then, exchange volume surges have roughly coincided with talk of a renewed lira crisis.

So far, BTCTurk has dominated the Turkish market, growing faster than many other compliant exchange platforms in the Middle East. Güneri said the best way to market bitcoin is still by using mass media. They sponsor mainstream cultural institutions, such as the national Turkish soccer team, to spread brand awareness, and advertise through mass media broadcasts as well.

“The second layer is the educational layer; we’ve been investing in educational TV programs,” Güneri said, referring to both YouTube programs and traditional TV shows the exchange sponsors.

See also: Bitcoin in Cuba: A Local YouTube Influencer Explains How It Works

“We believe trust is still the main area that we have to invest … to cooperate with large brands and institutions,” Güneri said. “the DNA of the average Turkish person is inclined toward hard assets. Good times, bad times, doesn’t matter. … Bitcoin is now a real alternative for some people, because it is the new generation of hard assets.”