For $15K, He’ll Fake Your Exchange Volume – You’ll Get on CoinMarketCap 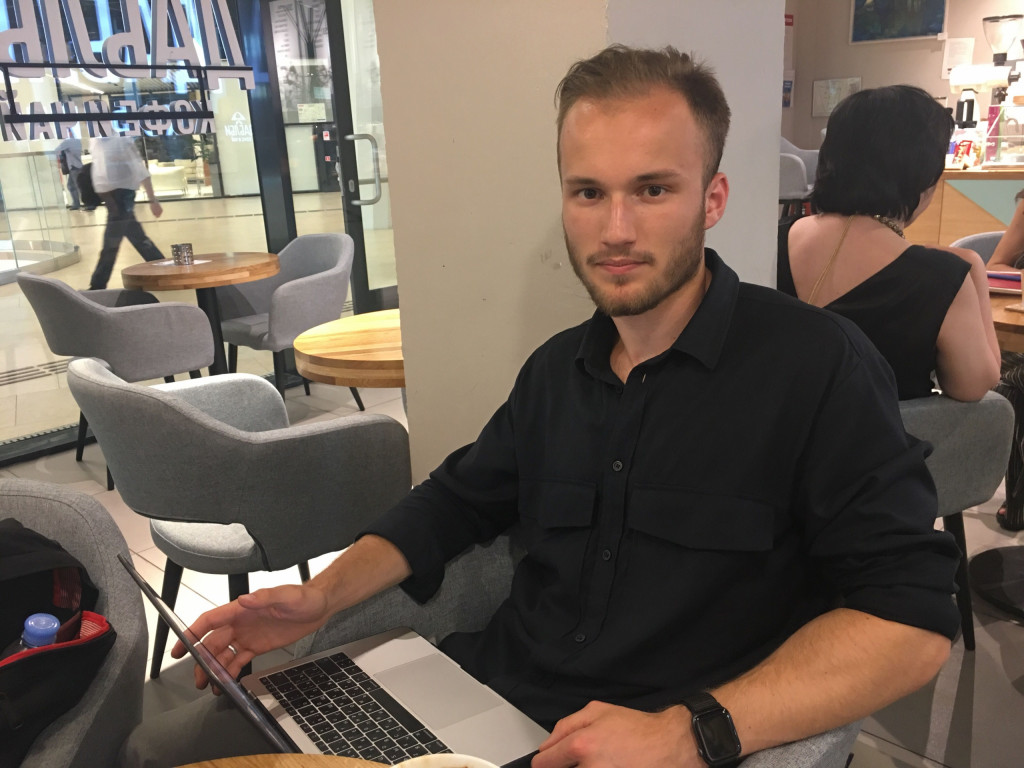 To cryptocurrency professionals trying to legitimize their industry, market manipulation is a scourge. To 20-year-old Alexey Andryunin, it’s a living.

A sophomore at Moscow State University, Andryunin is the co-founder of Gotbit, a firm that specializes in making obscure cryptocurrencies look like they’re being actively traded. For a fee, the two-man shop will program bots to trade a token back and forth with each other on also-ran exchanges until it has enough “volume” to get listed on CoinMarketCap. Once it appears on that influential market data site, an asset can gain the attention of larger platforms and bigger investors.

Explaining why Gotbit is not registered in any jurisdiction, Andryunin was blunt, telling CoinDesk:

“The business is not entirely ethical.”

The business is not entirely unheard-of, either, in a global market notorious for its lack of transparency. Bitwise Asset Management, one of several U.S. firms seeking regulatory approval to launch a bitcoin exchange-traded fund (ETF), has estimated that 95 percent of bitcoin trading volumes are faked and only 10 exchanges publish reliable data about volumes on their platforms, without inflated numbers.

Bobby Ong, CEO of crypto ranking portal CoinGecko, said businesses like Gotbit exist and “it won’t be too hard to find such people who can help you with these services.”

“These operators usually go around claiming that they can do market-making for token projects and inflate trading volume for a fee. This practice is also known as wash trading and is illegal,” Ong said.

It is possible to detect wash trading from the outside, Ong noted. Looking at the trade history and order book of exchanges, one can notice certain patterns and see that something fishy is going on:

However, it’s rare to hear manipulators openly discuss their trade, for obvious reasons.

In recent interviews, Andryunin walked CoinDesk through the mechanics of Gotbit’s business, which helps crypto projects to literally fake it until they make it.

Andryunin arrived late for our meeting in Moscow City, an upscale business district of metal-and-glass skyscrapers, fancy cafes and the offices of multiple crypto-related businesses. He had just seen a client. The applied math major hardly makes it to classes. Among his classmates, almost everyone is now obsessed with crypto, he said.

He started Gotbit with a fellow undergrad in 2018, while initial coin offerings (ICOs) were still in vogue. His partner codes the trading bots while Andryunin reaches out to token projects to sell Gotbit’s “market-making” services. Listing on a small exchange costs $8,000; a month of supporting fake trading volumes via algorithms imitating normal market activities will run you $6,000.

Getting the token on CoinMarketCap is a bit steeper at $15,000. To achieve that, first a project needs to get listed on two small exchanges. These platforms would die without artificial volume, Andryunin believes. A telltale sign is that little-known cryptocurrencies trade on these exchanges much more actively than bitcoin, the original cryptocurrency and the industry bellwether with the largest market capitalization.

The exchanges usually know when Gotbit’s bots are inflating the volumes of altcoins, Andryunin believes, but higher numbers are in these exchanges’ own interest. Policing manipulation is not.

These exchanges charge a couple of bitcoins (about $20,000 at recent prices) to list a token, and have no other real criteria, Andryunin said. As examples of exchanges with such standards, he mentioned Hotbit, based in Shanghai, and BitForex in Hong Kong. Neither exchange responded to CoinDesk’s requests for comment by press time.

(After publication, Bitforex branding manager Max P. sent the following statement: “In a world with an overwhelming number of dubious coins and tokens, a listing fee is standard practice for cryptocurrency exchanges. It goes a long way to determine the seriousness of a partner, ensuring that we are able to bring tokens from projects that are determined to succeed to our users.” BitForex’s fees “are determined according to project scale and operational capacity,” he added.)

“It’s well-established that many exchanges likely engage in practices to inflate the volume they report in order to drive interest in their platforms and to attract new customers,” Alameda Research, a crypto trading firm, said in a recent report. Alameda analyzed the order books and trading history of 48 crypto exchanges worldwide and found that on 14 of them, genuine trading volume might well be zero. BitForex is among the 14.

On such exchanges, Gotbit appears to be the main source of liquidity, Andryunin said. “These small exchanges, I don’t even get it what they are living off, there are no real volumes there.”

After a token is listed on two exchanges and shows some trading activity provided by bots — the volume can be less than $100,000 a day per exchange – there is a chance to get it listed on CoinMarketCap. From there, Gotbit is out of the picture, according to Andryunin, who said other intermediaries help accomplish the last step.

Exactly how they do it, he doesn’t know. But it gets done: “Our clients are at [the] 300-500 positions on CoinMarketCap.”

Carylyne Chan, CoinMarketCap’s head of marketing, told CoinDesk that to get listed on the site, a token must satisfy a set of criteria, including using blockchain tech; having a functioning website; being listed on two exchanges that are, in turn, listed on CoinMarketCap; and providing a direct line of communication with a project representative.

Asked if it’s possible to fool the system by inflating volume, Chan said: “Our stance is to list as many crypto assets as possible, covering the universe of crypto assets over time. We are not in the business of censoring information.”

CoinMarketCap also flags projects with suspicious activity on its website, she added, “based on regulatory circulars or user-submitted information.”

Gotbit’s clients typically have done an ICO and now need to calm their investors by showing some market activity, Andryunin said.

Most of these founders care about their projects and are trying to make them work, he believes, but out of the 30 projects Gotbit is working with, only two or three are “really creating some value,” have a working business model and reached the point of building an actual product.

At that point, people who bought those tokens come to terms with reality, Andryunin said, joking:

“No more Lambo dreams, a bike would be fine.”

CoinGecko’s Ong said optics are indeed a motivation for many crypto teams.

“Token projects are sometimes pressured to use such market-making operators because they need to show their major investors and token holders that there is significant market interest in their project and things are going well,” he said. “Some are also doing it because they do not want their price to fall precipitously and want to maintain an ‘optimal’ price or have it increase over time.”

Part of the pressure, Ong added, comes from exchanges, which require a minimum trading volume and de-list thinly traded tokens.

In a rare case, one project that used Gotbit’s market-making service made it to the top 100 on CoinMarketCap, Andryunin claimed. He wouldn’t name the token but said the project had a strong team and business model from the beginning.

Why would a legit team use artificial volume pumping?

“They wanted to get listed on large exchanges, and get some cash, too,” Andryunin said.

To show imaginary volumes, Gotbit’s bot fills an exchange’s order book – again, we’re talking about small exchanges with minuscule volumes – and closes the orders itself using the same or another account. Usually, clients have four accounts, but two are enough for trading with yourself, Andryunin says.

In order to make these volumes plausible, Andryunin said, Gotbit programs its algorithms to mimic the normal patterns of trading in different parts of the world at different times of the day and year.

Gotbit’s pitch deck – yes, it has a pitch deck – features charts of trading volumes it pumped for several tokens, with their names redacted (Andryunin said he signs non-disclosure agreements with clients). Sometimes a client decides to turn off the bot and the volume plunges to zero, if nobody but Gotbit’s bot is trading the token.

The volume bot’s orders are not supposed to be executed and settled, just create an illusion of trading. In theory, some real holder who purchased tokens during an ICO can come to the exchange and take the orders – in this case, Gotbit would end up with a heavy bag of illiquid coins.

To prevent this from happening, the bot watches the exchange’s wallets on Etherscan, a popular block explorer for the ethereum blockchain, and when there is a big transaction of the coin in question, all orders are immediately canceled. Gotbit works only with the ERC-20 tokens which run on top of ethereum, so it’s easy to monitor the movement of funds on the network.

Another Gotbit service is placing buy and sell orders at certain price intervals to control the bid-ask spread, or gap between what buyers are willing to pay and sellers are willing to accept. Normally, this spread is a strong signal of market maturity or lack thereof; a tight spread shows sufficient demand and supply to meet at a compromise price, while a wider spread indicates an illiquid market.

Hence, Andryunin said, some projects want to show that their tokens are traded at a narrow spread, to create the impression that there is a live, healthy market for the coin.

Gotbit also has an algorithm allowing the bots to dump a token without affecting the price: to do that, the bot looks for buy orders already present in the order book and quickly fills them.

This is possible, he said, if there are at least some real buyers on the market – sheep, as Andryunin calls them, which are herded into the market by the projects and then “shaved” when the price is high (pumped by the bot).

Time to close up shop

Andryunin has no illusions about the future of his business.

As regulation of the crypto market gets tighter across the globe, the world of little exchanges full of junk coins with bizarre charts will ultimately be stamped out, he acknowledged.

The main factor, he said, will be the new international guidance from the Financial Action Task Force (FATF) for regulating crypto-related services and exchanges, which will require more stringent customer-identification processes akin to traditional banking.

“I think FATF will shut it down quickly: the cryptocurrency exchanges will be regulated like NASDAQ and pumping fake volumes will be banned,” Andryunin said, adding:

“I’m not big on legal questions, but I think doing on NASDAQ what we are doing here would be a financial crime. And the exchanges will have to monitor it that people are not trading with themselves. Otherwise the exchanges will get blacklisted.”

Hence, Gotbit’s market-making business is winding down, and the team is switching to other services, the most popular of which is initial exchange offerings (IEOs), a type of ICO that is conducted on an exchange.

Besides, Andryunin said, he and his partner have a more prosaic concern: to get through final exams.