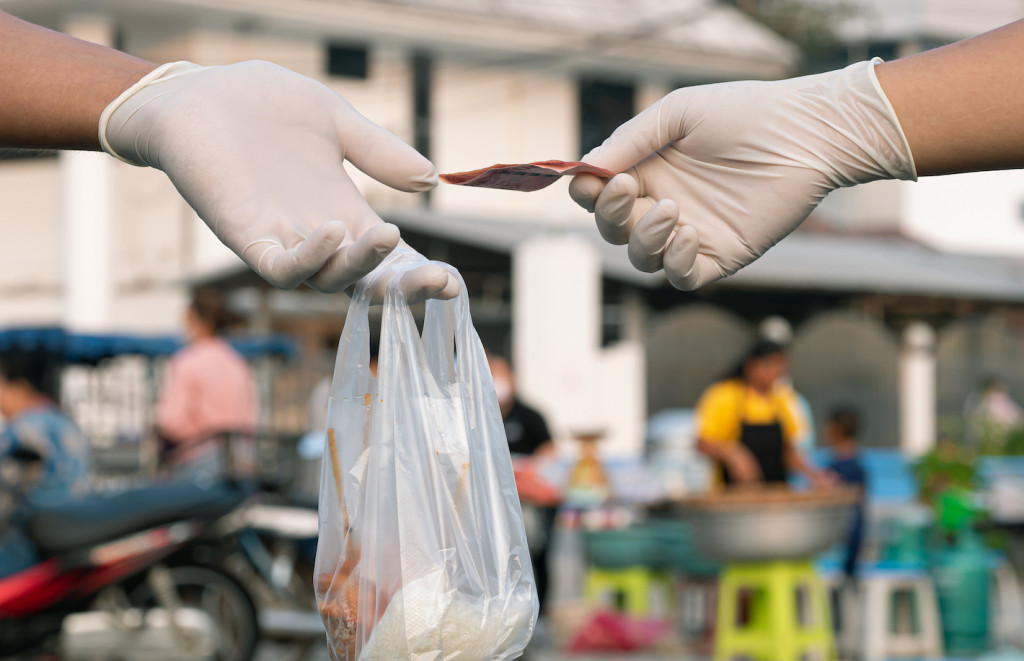 Is a cash-based society sustainable in the age of coronavirus? Hoarders say yes, health experts say maybe and the visionaries say no: COVID-19 is the catalyst for systemic payments change.

This wrecking ball of a virus stands to change the way consumers, and businesses, think about their use of physical currency. In many countries, cash is already on the margins: for example, Sweden, whose central bank is actively examining digital alternatives.

Cash is slowly receding from American life as well, though not as dramatically as it has for the Swedes. Cash comprised some 26 percent of transactions in 2018, down four percentage points from the previous year, according to the Federal Reserve Bank of Boston’s most recent annual Diary of Consumer Payment Choice.

On the other side of this crisis could be a more profound shift in the way we pay for goods. In the short term, though, coronavirus is spooking some people into limiting their interactions with bills of all forms.

“The question is, if we’re all forced into social isolation, well, cash isn’t much good,” said Dave Birch, director of Consult Hyperion and a longtime advocate of digitization. “But what else is better?”

Governments now mandate what health experts and doctors implore: Don’t leave your house except to buy food and medicine, and keep six feet of distance from others when you do. And Don’t. Shake. Hands.

In light of that mandate, exchanging paper money seems absurd. Those colorful cloth-and-paper stores of value pass directly between hands all the time, collecting — and maybe spreading — a veritable universe of unknown microbes up and down the chain.

The mere possibility that SARS-CoV-2 (this novel coronavirus’ scientific name) could be among them has prompted countries to swiftly move away from person-to-person cash exchange. German Chancellor Angela Merkel paid by card on a recent trip to the grocery store, breaking with her nation’s cash tradition and limiting her direct interaction with the cashier.

See also: How a Flurry of ‘Digital Dollar’ Proposals Made It to Congress

Businesses, too, are beginning to tout “no contact” services, including DoorDash and GrubHub, two food-delivery services getting blitzed with orders as people stay home. Rather than handing customers their orders, drivers leave packages at the door.

Governments have gone even further. In China, where the virus started its spread, the central bank ordered the sterilizing of potentially contaminated banknotes and only distributed new notes after a 14-day quarantine. South Korea has reportedly taken similar measures.

But it’s not yet clear how effective or necessary these efforts are in the fight to stop COVID-19. While researchers believe the virus can sit, and spread, on surfaces, they do not know yet if it can be transmitted on currency.

“Currently, the Centers for Disease Control (CDC) has determined that COVID-19 spreads mainly through person-to-person contact,” a spokesperson said when asked if the central bank was considering destroying potentially infected banknotes. However, while it won’t be destroying money, it does have a “contingency stock” of clean bills ready to go and is staying in “close contact with the CDC” in case the thinking changes.

In the absence of a scientific determination, banks are deploying a mix of tactics to battle contagion fear, including asking consumers not to hoard paper money at home.

The Colorado Bankers Association begged consumers to keep their cash in the bank, in a March 18 press release.

“A single dollar bill can be home to as many as 3,000 different bacteria and has changed hands upwards of a thousand times,” CBA said, proclaiming bank deposits as a “prudent defense against contamination.”

By contrast, the Federal Deposit Insurance Corporation (FDIC) and Office of the Comptroller of the Currency have encouraged financial institutions to work with communities in responding to COVID-19, in part by asking them to raise ATM daily withdrawal limits.

“The FDIC recognizes that such efforts serve the long-term interests of communities and the financial system when conducted with appropriate management oversight,” the agency said.

The regulator is nonetheless encouraging Americans to keep most of their cash in the bank. It reminded consumers that “FDIC-insured banks remain the safest place to keep their money,” in a March 18 press release.

“The last thing that you should be doing is pulling your money out of the banks now, thinking it’s going to be safer someplace else,” Federal Deposit Insurance Commission Chair Jelena McWilliams said in a widely shared March 24 video. She also warned against mattress stuffing, saying, “It didn’t pan out well for so many people.”

In addition to the public health concerns, these organizations are trying to get ahead of a potential bank run. COVID-19 threatens to trigger an economic downturn comparable in some respects to the Great Depression, during which panicking consumers, fearful of bank failures, withdrew their cash deposits en masse.

But the COVID-19 crisis is not a banking crisis, noted Jeffrey Saut, former chief investment strategist for Raymond James. There’s no reason for consumers to liquidate their accounts because the banks have not been affected by COVID-19, he said.

Indeed, banks in the U.S. are healthier than they were going into the last global financial crisis. According to FDIC data, the leverage ratio for all insured institutions nationwide was 9.66 percent on Dec. 31, 2019 (the most recent date for which figures are available). That’s up from 7.81 percent on Sept. 30, 2008, two weeks after Lehman Brothers failed. The higher the ratio, the more capital banks have to withstand losses.

On a more systemic level investors are putting their faith and credit in their banks, said Tobias Adrian, director of the International Monetary Fund’s (IMF) Monetary and Capital Markets Department.

“Cash, the physical object, is now potentially contagious but cash, the financial asset, is still a safe option,” Adrian said.

The global equity sell-off has seen investors move over to safer assets, of which cash in the bank is certainly one, he said. “Bank deposits are a form of safer asset, like digital cash.”

Nevertheless, consumers have apparently begun lining up for small-scale cash withdrawals. Already bulking up on canned goods and toilet paper, consumers are reportedly building out their physical cash reserves with repeated trips to the ATM.

Cash, the physical object, is now potentially contagious but cash, the financial asset, is still a safe option.

They’re not necessarily losing faith in the banking system specifically. Rather, said sociologist Andreas Folkers, these hoarders – of cash, cans, food, medicine, anything – are reacting to a wider breakdown in society’s day-to-day routine that strips them of trust overall.

“When expectations of what the normal state of things is and what can be expected in the future break down, this immaterial or social intangible resource of trust gets lost,” said Folkers, a researcher at the University of Giessen’s Institute of Sociology in Germany.

“This is definitely one reason why people cling to very tangible or material goods in times of crisis, because that’s something they can hold on to without being dependent on trusting people and trusting the state of events,” he said.

Put simply, during a crisis it’s easier to trust the money in your hand than it is the money in the bank, whether or not you have reason to believe that the intangible money is under any specific threat.

Governments and the private sector have an opportunity to build robust payment and value transfer systems that work in ways cash can’t, said Birch. He points to China’s AliPay. With nearly 55 percent market share as of Q3 2019, it’s the e-payments giant in Chinese consumerism – a tenet of daily economic life.

It’s an ingenious way to track users’ potential exposure to coronavirus, Birch notes. “Green” users – presumably those who have tested negative for the virus – are allowed to move about the public, and they scan QR codes to “check into” densely populated areas like subway cars as they do.

“If somebody in the subway car is found to have the virus, you don’t have to test everybody on the train, you only have to test people in the car,” Birch said.

But Alipay Health Code’s tracking and tracing may grant the Chinese government a wide-open back door: A New York Times investigation found the program forwards users’ locations and personal information to servers at every scan point. The forwarding function’s name? “ReportInfoAndLocationToPolice.”

Alipay Health Code amounts to a startlingly effective and strikingly pervasive surveillance apparatus hard-coded into consumers’ electronic payments portal of choice. Swap “government” for “Facebook,” though, Birch said, and the reality may feel a bit closer to home.

“Neither of those seem, really, the best way forward.”

Governments and companies will have to build systems that prioritize responsible anonymity instead of exploiting people’s data, Birch said.

COVID-19’s most profound impact on money may come in months ahead, when it is hoped society returns to a semblance of normal as people try to resume their daily lives.

One aggressive scenario envisioned by Jeff Dorman, the chief investment officer of digital asset investments firm Arca, is a sudden rush to cryptocurrency. He predicts more people will move more cash into more crypto after the pandemic, causing yet more people to do the same. It’s recursive feedback. Exponential growth. An unflattened curve.

COVID-19 “is just one more step in that acceleration process,” Dorman said, acknowledging that pinpointing any one “tipping point” is next to impossible.

A slightly more mainstream prediction is that COVID-19 will push governments to more seriously consider digital payment alternatives. Governments may well leverage this crisis to move in the direction of a “cashless society,” said Jason Hsu, former legislator with the Taiwanese government who now advises on policy.

He’s advocating Taiwan take a radical stance on government cryptocurrency – a central bank digital currency – in the face of this crisis, especially when it comes to disseminating Taiwan’s $2 billion coronavirus stimulus package, a rescue effort on par with that of other virus-shattered economies.

“I’m now advising the government to set up a blockchain-based cryptocurrency deployment method to deploy this stimulus package,” Hsu said.

In the meantime, Adrian at the IMF said he’s turning to established “contactless cash” alternatives whenever possible to limit exposure to the virus.

He predicted non-contact payment methods will remain appealing post-crisis, perhaps as a holdover from these maniacal days of no social contact – at least not within six feet.