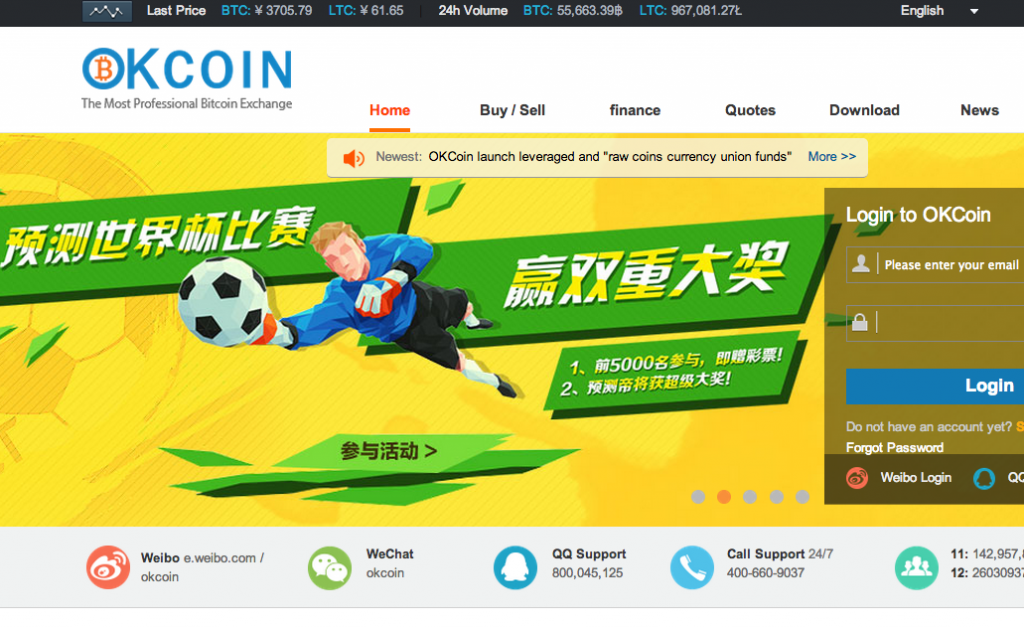 In the wake of increasingly strict policies from the People’s Bank of China – China’s central bank – the country’s bitcoin exchanges are beginning to turn their focus to international markets and foreign buyers.

For example, on 12th June, BtcTrade announced it would introduce USD trading on its platform. OKCoin is now following suit by announcing new offerings to English-language investors with the relaunch of its previously halted peer-to-peer (P2P) margin trading services.

OKCoin now indicates that users of its Chinese-language and new English-language website can take advantage of its P2P margin trading. Site users can borrow and lend money using the service, setting the desired interest rate on loans to connect with borrowers searching for trading extensions.

Changpeng Zhao, the company’s Chief Technology Officer and former Head of Development at Blockchain, emphasized that the resumed services will help the company seek a new audience for its product.

“Bitcoin has no borders. We believe users around the world will find value in our services.”

OKCoin halted its margin trading services for all customers in early May, in part so that the system could be redesigned to meet recommendations from the PBOC meant to inform customers about the risk of such financial investments.

OKCoin’s reintroduced margin trading service allows users to take up to 3x leverage at any available interest rate on the marketplace, or earn interest by lending to others.

The exchange’s service, in turn, matches prospective lenders and borrowers, allowing for what it calls “pain-free and quick loan transactions”.

The P2P service has two levels, the OK Standard Fund, featuring insured deposits and no minimum loan size, and the OK VIP Fund. Users in the latter category must sign a statement acknowledging the risk of their investment and must contribute minimum 1,000 BTC loans.

In addition to its latest service and the introduction of an English-language version of its site, OKCoin has seemingly been putting an increased emphasis on foreign markets in light of recent regulatory pressure.

This larger movement by the PBOC was most recently visible in reports that China is potentially considering harsher restrictions on third-party voucher trading, a stopgap measure that helped the country’s exchanges work around policies originally set by the bank in December.

Beyond a purely business focus, however, OKCoin has also been reportedly seeking to take on popular public interest projects in the digital currency space. This includes potential interest in the movement to revive insolvent Japan-based exchange Mt. Gox, a project also embraced by well-known members of the ecosystem such as VC investor and Bitcoin Foundation board member Brock Pierce.