Did Margin Trading Crash the Price of Bitcoin? 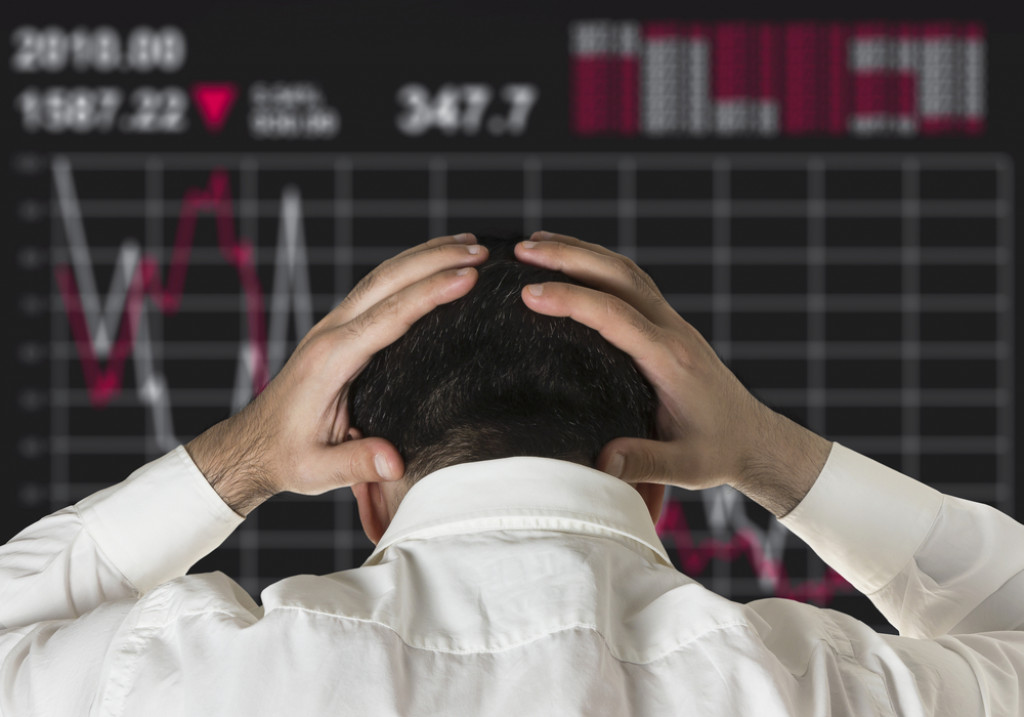 The price of bitcoin declined to its lowest level since May yesterday, falling nearly 10% and ending what had been a long period of relative optimism and stability for the global bitcoin market.

But while there were many theories as to what news events could have caused bitcoin’s value to fall into such a steep decline, some market observers believe that this most recent movement may have been caused not by external factors, but by the actions of bitcoin traders.

This theory, perhaps most notably posed by Raffael Danielli, posits that out-of-control margin trading caused a flash crash in at least one major bitcoin exchange market, a development that had a cascading effect across the larger bitcoin market.

Speaking to CoinDesk, Danielli elaborated on his post, suggesting that initial positive sentiment about New York’s proposed bitcoin regulation had a profound impact on the digital currency trading community, but that it was how investors acted on this information that proved problematic.

“[Positive sentiment about US regulation] resulted in large buying activities and traders on Bitfinex started to borrow as much money as they [could] to buy more bitcoins and increase their position in anticipation of a market upswing. As it turned out, New York’s proposed bitcoin regulations are more on the harsh side and the European banking authority also decided to take a very cautious approach.”

He concluded: “In other words, many traders were caught on the wrong foot and today they paid the price.”

The rise of bitcoin margin trading

Margin trading allows investors to borrow money from brokers, funds that are then leveraged by borrowers to trade on the outlook of bitcoin. Borrowers can then place bets on how they believe the market will perform, going either ‘long’ or ‘short’ depending on whether they think the price of the asset will rise (long) or fall (short).

When margin traders close their position, they return the original principal to the investor, plus any agreed upon interest, and the borrower is assessed a profit or a loss.

While a mainstay of major traditional markets, margin trading is relatively new to the bitcoin ecosystem. China’s largest bitcoin exchange OKCoin introduced its margin trading service this June, while Bitfinex opened its offering in June of 2013. BTC-e, another major Europe-based exchange, also offers the service.

Though he is a critic of margin trading, Danielli was quick to point out that the practice is not something that’s unique to the bitcoin ecosystem.

“All major exchanges in the world such as NASDAQ, NYSE and BATS have to deal with similar events like the one we observed today.”

Proponents of margin trading assert that the trading option provides experienced investors with the chance to gain significant profits, provided they properly gauge the risks associated with their borrowing.

Danielli suggested that news was a factor in yesterday’s price decline but only in how it influenced overall trading activities and investor sentiment. Still, his statements illustrate how these factors can prove to be a powerful combination.

He argued that traders rushed to place long bets after the release of New York’s BitLicense proposal, but that as the narrative surrounding the regulation soured, the positions placed during this period of optimism were left in limbo.

Further, a number of smaller news events compounded, he said, slowly weakening optimism about the market.

Danielli cited the news that certain recipients of the Ethereum project funds could sell roughly 2,600 BTC (roughly $1.2m at press time) raised in its initial bitcoin fundraising, and concern over increased merchant adoption as factors that influenced traders.

“Many traders were caught in large, leveraged, long positions entered in mid-July around $600 to $640 as can be seen from the change in open swap positions,” Danielli said, adding:

“It was just a question of time until those traders would hit the margin call if prices continued to drop.”

This trend, Danielli argues, came to head at roughly 1:00am UTC on 14th August with one large sale order on Bitstamp that caused 500 BTC to be sold in one minute, pushing the price down to $525.

Prices on Bitstamp and Bitfinex began to decline, and as the price of bitcoin on these exchanges neared $520, a “breaking point” was hit, he said.

“After this point, Bitfinex started to liquidate positions of traders who could not cover their margin anymore and selling their positions in the open market,” he continued. “This increased downward momentum and subsequently more traders got hit with margin calls.”

This, Danielli asserts, caused the price to crash to $451 on Bitfinex before the markets could recover. However, Bitfinex offered a different take on the events.

Given this belief that margin trading likely contributed to the decline of bitcoin’s price, CoinDesk reached out to the major exchange platforms that offer the service, with only one exchange, Bitfinex, responding to requests for comment.

Bitfinex management told CoinDesk it remains confident in its service, saying that ultimately, the responsibility for trading activity lies with the bitcoin community, who must understand the risks involved with margin trading. The exchange framed itself as a service provider, and that far from being a contributing factor, its procedures actually prevented larger market losses.

“In this particular instance, we had two extremely large, unforced, market sell orders come in one after another. While there were some forced liquidations, it was not the majority of the trading activity around that time.”

Bitfinex argued that, despite some claims in the community, it does have such safeguards in place to help stop such harmful actions on its market, and that its platform actually prevented a more extreme flash crash in this instance.

“All systems performed nominally and according to design. We were very pleased to see that our hard efforts in improving our risk management technology and process yielded an orderly result.”

Speaking to CoinDesk, other market observers suggest there may have been more malicious activities that contributed to the price crash, and that neither the exchanges offering the service or the involved traders may have been a factor in yesterday’s events.

Jonathan Levin, chief executive at Coinometrics, an analytics firm seeking to promote digital currency exchange transparency, is more skeptical that the trading was the result of news pressures.

“It was quite clear that what triggered the flash crash was a series of margin calls being closed out […] but the question is, who was doing it? Was it market manipulation or was it literally just a big position being closed out?”

Levin has performed a preliminary analysis that shows plenty of profit was realised during the flash crash, and that there were clear warning signs that a big price dip was imminent. Levin pointed out that the volume of bitcoin swaps on Bitfinex grew sharply two days before the crash.

Swaps are a tool offered by the exchange to allow owners of assets, like bitcoin holdings, to loan them out for a return. The loaned assets can be used for leveraged trades as well as for short-selling. A short seller would borrow bitcoin using a swap and then sell that bitcoin for US dollars, Arthur Hayes, CEO of BitMEX, said.

The increased bitcoin swap activity suggests that traders were able to take short positions ahead of the flash crash, therefore profiting from the plunge in price.

But the link between the rise in short positions and the eventual trigger for the flash crash – the two big sale orders – is open to interpretation for now.

“Could it be that someone had insider information on these long positions? I don’t know,” Levin said.

A skillful trader with sufficient resources could also have spotted that market conditions were ripe for an adventurous short to make a killing on the market, according to Hayes, who added:

“Savvy traders try and sniff out where the margin call trigger levels are and push the price down to trigger margin calls and cover their short at lower prices.”

While Levin said that he prefers not to speculate whether market manipulation was behind the flash crash, he noted that the spike in bitcoin swaps on the exchange was a warning signal that investors should have heeded.

“The chart with the shorts coming in, I think that’s a warning signal. That should have warned the market,” he said.

Still, Hayes believes that a confluence of factors created the conditions for the flash crash, not least of which was the summer holiday season.

“The new marginal buy and holder of bitcoin is probably on a beach or family vacation somewhere,” he said.

While traders were on vacation, order books remained thin, creating the conditions for big price swings if a relatively large sell order landed on the market, Hayes said.

Hayes also pointed to growing merchant acceptance of bitcoin as a reason for an increased supply of coins, as merchants immediately exchanged the digital currency that customers handed them to fiat. Miners, who needed to regularly exchange bitcoin for fiat to “pay their bills” were another reason for selling pressure on the digital currency, Hayes said.

Jean Marie-Mognetti, a director at Global Advisors, a bitcoin hedge fund, went even further afield to describe the factors responsible for the flash crash, saying:

“Rather than looking at bitcoin in isolation, it’s important to consider it in light of broader macroeconomic factors.”

Mognetti pointed to a number of concerns in Europe that have weakened the bitcoin price outlook, noting that there were concerns over Germany’s GDP growth, lingering worry over a eurozone recovery and a Russian ban on imports that could be ratcheting up geo-political tensions. Commodities like crude oil, natural gas and copper have also declined in price, he noted.

“In such an environment, conditions for a bitcoin rally don’t seem to be in place. Holders of bitcoin may feel inclined to reduce their risk profile,” he said.

CoinDesk contacted OKCoin and BTC-e for comment on this piece, but did not receive an immediate response.