India May Be Starting Its Biggest Bitcoin Bull Run Yet 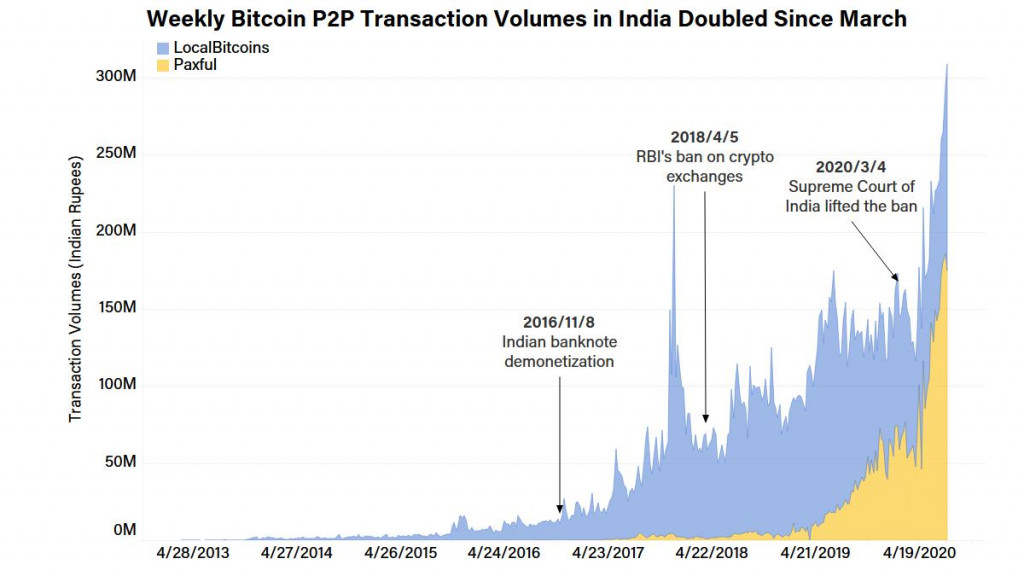 India’s crypto trade volumes have soared since the Supreme Court of India lifted banking restrictions for exchanges in March.

Siddhartha Dutta, CEO of Marlin, a tech startup in Bangalore, said the recent spike in demand for bitcoin mirrors Indians’ reaction to demonetization in 2016. Back then some people learned the value of holding bitcoin, whose issuance is not controlled by any government, when the Indian government recalled a vast percentage of paper currency.

The old bills suddenly lost value due to a government decree. The idea that bitcoin’s value is based on market principles, instead of fickle government policies, made it particularly attractive.

The price of bitcoin on Zebpay, an Indian crypto exchange, had surged from $757 to $1,020 in 18 days after demonetization, while the bitcoin price in the U.S. remained relatively static. For some Indian investors, investing in bitcoin was a safe option to store their wealth and minimize the uncertainties caused by demonetization and a possible gold ban.

Now, the lifting of banking restrictions appears to have unleashed pent-up demand for cryptocurrency, which no government can declare worthless. These days bitcoin activity is ramping up across India on peer-to-peer exchanges such as Paxful and LocalBitcoins.

As the chart below shows, India’s peer-to-peer bitcoin transaction volumes have doubled over the last five months.

According to a spokeswoman for Paxful, one of the leading peer-to-peer trading platforms, India is now among the five fastest-growing bitcoin user groups in the world. Paxful’s Indian volumes surged from around $576,000 in May 2019 to $8.97 million in July 2020, and the total peer-to-peer Indian volumes on Paxful and LocalBitcoins reached $13.7 million. Smaller exchanges serving the Indian market, like Delta Exchange, are also seeing rapid growth (though Delta is a derivatives exchange, not a spot market). Delta Exchange CEO Pankaj Balani said new signups are growing 100% month-over-month.

Dutta believes crypto has also been slowly gaining traction thanks to mesh networks that help provide connectivity and fast streaming in rural areas. This could signal the start of an even bigger adoption cycle.

“People in India are getting exposed to the internet, mobile first,” Dutta said. However, he added, this growth should not be mistaken for “mainstream” adoption.

Bangalore-based entrepreneur Prashanth Balasubramanian is the co-founder of the Lightning wallet startup Lastbit. Lastbit aims to reach beyond the Indian market to serve Europe and eventually North America. But since 2020 will be a year of relative quarantine, Balasubramanian is thinking it’s a good time to build at home.

“Silicon Valley is a fantastic place for business, but as a young company we’re able to function more effectively and keep things lean with a 10x difference in runway by using our Indian roots,” he said.

Dutta said he expects that cryptocurrency projects will continue to proliferate across India’s tech industry during the coronavirus recession.

“There is certainly potential to grow much more,” Dutta said.

Read More: Why Bitcoin Bulls Are Betting on Explosive Growth in India

Update (Aug. 12, 2020, 19:00 UTC): This article has been updated to clarify Delta Exchange is a derivatives provider, not a spot exchange.