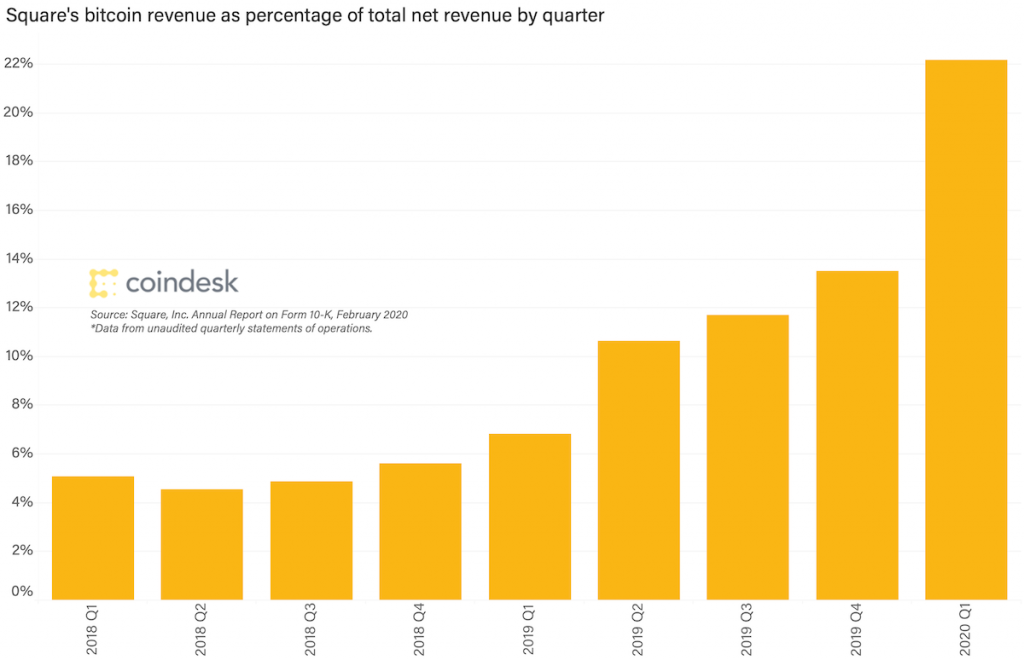 Bitcoin has flippened USD on Square’s Cash App, sort of.

As reported in the publicly traded fintech company’s first-quarter earnings Wednesday, Cash App brought in $222 million on all its other fiat-powered services in Q1. Meanwhile, revenue from bitcoin was $306 million, the first quarter in which bitcoin revenue surpassed all other revenue on the app.

Gross profit on Cash App, however, remains to be found primarily outside of crypto. Of Square’s $222 million in non-bitcoin revenue, $178 million of that was profit. The Cash App saw one of its best quarters yet for new users in the first quarter of 2020, across its many different services.

Still, on the revenue side, the year-over-year growth in bitcoin sales was steep.

In a filing with the U.S. Securities and Exchange Commission, the company noted:

Total revenue for Square this quarter was $1.38 billion, roughly 43% over what it earned in the first quarter of last year. Square had $535 million in gross profit for the quarter, but a $105 million net loss.

Square CEO Jack Dorsey described a few of the ways that the Cash App has found growth during the COVID-19 crisis.

For example, by making it easy to do direct deposits into Cash App, the firm saw enormous growth, Dorsey said in Wednesday’s earnings call. Direct deposit users were more likely to use more of Cash’s other services, such as peer-to-peer payments and bitcoin purchsaes. Further, Square collaborated with companies like Twitch and Spotify so fans could directly support their favorite creatives.

“We have reached a very mainstream influencer audience,” Dorsey said. “And because of the simplicity, because of how we handled the stimulus check and because of everything you can do within the app including buying stocks and bitcoin and Cash Card, we think we’ll benefit and draft off a lot of trust, a lot of love, for what it offers and what it can do. And word of mouth is definitely our friend here.”